Indicator are releasing in October a Blu-ray box-set of the Fu Manchu film series starring Christopher Lee as the nefarious super-villain- a huge fan of their Hammer box-sets, I was pretty intrigued they would go to all that effort – its the usual bonanza of restored films, commentary tracks, archive audio recordings and new video interviews – considering that the films are largely frowned upon today in just the same way as similar Hammer material of that era. Discarding all the racial stereotyping issues, I was unimpressed, really, by Hammer’s The Terror of the Tongs (1961) that appeared in Indicator’s third Hammer set last year- I thought it was a very lacklustre effort only enlivened by a typical Christopher Lee performance elevating it to Shakespearean drama. Someone obviously noticed something in Lee’s unofficial Fu Manchu to warrant hiring him for the real thing, because five official Sax Rohmer adaptations followed: The Face of Fu Manchu (1965), The Brides of Fu Manchu (1966), The Vengeance of Fu Manchu (1967), The Blood of Fu Manchu (1968) and finally The Castle of Fu Manchu (1969).

I’d never seen any of them, but the geek and film-fan in me seems to be instinctively drawn to box-sets such as this, in a similar way as Arrow’s The Complete Dr Phibes Blu-ray set with its gloriously rotten films staring the wonderful Vincent Price. I imagined that the Fu Manchu series were at least as politically incorrect and racially blundering as Hammers The Terror of the Tongs, and marvelled at how ill-timed the release seemed to be, considering everything going on in the world today.

And then, wouldn’t you know it, but I noticed Talking Pictures, yet again proving to be a marvel as they broadcast the third entry in the series just a few days ago. I set the Tivo (Talking Pictures always schedule stuff at exactly the time that its impossible to watch it), and yesterday gave it a go.

I’ll cut to the chase- I’ve ordered the Indicator Fu Manchu box. Yes it was bad, but it was bad in a good way; surprisingly well made (far more ambitious and successful than Hammer’s effort) with a good cast and impressive locations and sets, and I found it a great pulp yarn. Yes its very politically incorrect and you’d never get this kind of thing made today, but that’s exactly part of the films appeal: its all rather insane and feels so wrong but I couldn’t tear my eyes away from it. The Vengeance of Fu Manchu is the third film in the series, which means, in the time-honoured tradition of film cycles, that’s its worse than the first two but better than the last two, and gauging those other films on the merits of this one, I have to say, this series could well prove to be a delirious blast this Autumn. 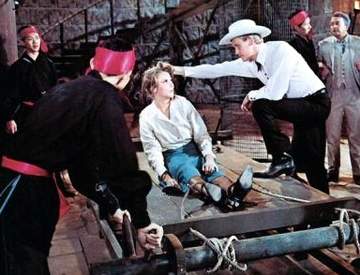 There’s a scene in The Vengeance of Fu Manchu set in the super-villains lair in which an American crook perpetually doffed with  a cowboy stetson is torturing a woman stretched out on a rack while her father is forced to look on from a cage suspended above: its decidedly strange and as crazy as it might sound. Considering the sensitivities regards western actors playing Asian characters these days, this film also features the novel spin (I doubt it qualifies as serious social commentary) of a plot-point in which an Asian character is given plastic surgery in order to pose as white man and commit murder.

I should point out my affection for a series of Robert E Howard yarns, Skull-Face in particular, but he did a run of Weird Menace stories for the pulps, which Howard wrote obviously inspired/indebted by the Sax Rohmer tales of Fu Manchu and the Western world under the threat of degenerate Asian menace. Clearly they are of their time and have to be accepted as such, but Howard was a masterful storyteller and wrote incredibly powerful potboilers (Skull-Face just blew my teenage mind back in the day). I can’t speak for the original Rohmer yarns as I never read them but Howard was a brilliant pulp writer. The Vengeance of Fu Manchu rather appealed to that love of mine for those Howard stories.

So I look forward to rewatching this film in high quality- all five films have been remastered in 4K from the original negatives for Indicator’s box-set – and naturally watching all the films in order.  Should be a guilty blast, if nothing else. We can’t get The Abyss on Blu-ray but we can get these Fu Manchu films… its a crazy bloody world, but I figure you just have to go with it.