True Detective Season Three continues (following a lengthy post-season two hiatus) this anthology show, here with a rather dense structure spanning three seperate timelines. Indeed, the central mystery of this season (relating to the disappearance of two children, and the murder of at least one of them) is almost incidental to that central conceit of the passage of time and its effects on the characters, and its impact on memory and self. It turns the season into a fascinating puzzle spread across some thirty-five years and benefits strongly from an excellent central performance from Mahershala Ali as detective Wayne Hays, whose life seems forever caught up by the mystery concerning the Purcell children’s disappearance. Two investigations, the first in 1980 when the children are lost, and a further re-investigation in 1990, fail to satisfy Hays and in 2015, with dementia already unraveling his sense of identity as the memories of his life slip away, he anchors himself to the case like it’s some kind of mental life-belt, to try finally to make sense of the case and maintain his sense of self.

The season takes place over eight episodes and slips between the three timelines almost as if without reason and defintely without warning, Its certainly disorientating but cleverly draws you in, making you a participant in the story as you try to make sense with the characters, particularly the increasingly bewildered Hays. Its also very well handled, how it often transitions between timelines, and very reminiscent of the end of Kubrick’s 2001: A Space Odyssey. Some of the transitions are poetically lyrical.

In one episode, having tricked the driver of a mysterious car hanging around his home in 2015, Hays finds himself suddenly alone in the dark street, one solitary streetlamp above him in a world of inky black void. He sees a fire a short distance away, and walks towards it, finally coming to the backyard of his 1990 home. He sees his younger self, naked but for boxer shorts, standing at a trash bin in which he is burning some clothes. His younger self, alerted by the sound of his older 2015 self, turns around to face him but that old self is gone. Now alone, he scrutinises his burning clothes and his wife walks out into the yard, worried at what he is doing… and the scene continues in 1990. This kind of thing happens all the time, and we often don’t know if what we are seeing is what really happened or just what the 2015 Hays is recollecting, his point-of-view that of an unreliable narrator as his dementia takes hold: in one scene in 2015 he has a positive conversation with his old partner Roland West (Stephen Dorff) about the old case, then goes to the toilet. When he returns a few minutes later he greets West as if he hasn’t seen him in years, totally forgetting the earlier conversation. If his mind is that hazy, just how unreliable are the old events we are seeing?

Ultimately, it almost doesn’t matter, because the case isn’t the twisted and dark shocker that fans of the first season, certainly, may have been hoping for. You can go to the well too often in attempts to shock and surprise (as demonstrated in the unravelling of Game of Thrones in its final seasons). It instead transpires that perhaps the real central concern of the season is the ties between freinds and family, and how their relationships are affected both by the case and the relentless march of Time. I’m sure it’s no mistake that the way Kubrick managed the fluid flow of time and ageing in 2001‘s strange eerie finale in the alien hotel room is replicated here so often. Its almost as if Hays is lost in Time himself, as much a witness and viewer as we are. It makes for a really interesting storyline and I really appreciated having mature characters as central protagonists and feeling the impact of the decades upon them. 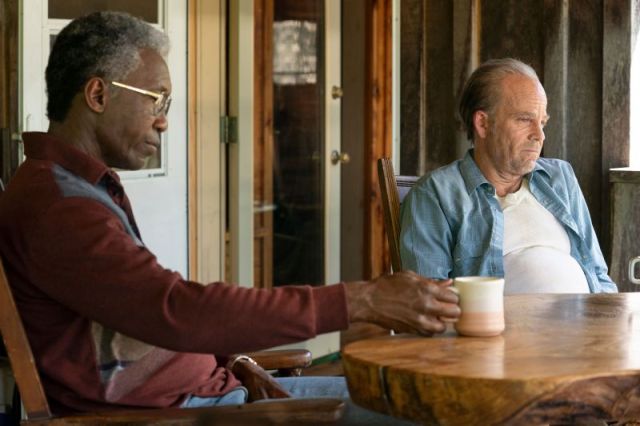 The sense of morbid dread and unease permeating through this season was almost tangible, intensified no end by a really disturbing soundtrack that was quite relentless and reminded me of some of Vangelis’ more experimental work back in his Nemo days (particularly, say, the bell-like clanging of metal tubes/scaffolding during the Bradbury building chase in Blade Runner, drenched in reverb). Certainly something got under my skin; during this past week of watching this season my sleep became increasingly uneven and I often found my daylight hours pondering what was happening in the most recently-watched episode and what might happen next.

In something of a minority, I was actually a fan of the shows second season, and I think across its three seasons it remains one of the better shows currently airing. Its title recalls the dime-store pulp novels lining the book carousels in stores of the 1960s and 1970s, their gaugy covers and dark, noirish stories, but doesn’t ever fall into the trap of, say, the rather more populist sensationalism of Tarantino’s Pulp Fiction movie. True Detective’s protagonists are people caught in worlds they cannot control, caught up in events that overwhelm them. Its Lovecraft by way of Philip K Dick. I could watch this kind of stuff all day long and hope that the wait for a fourth season isn’t as long as it was for season three.