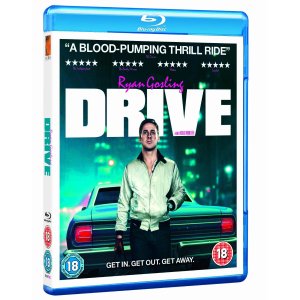 Finally got around to re-watching Nicolas Winding Refn’s Drive the other night. It’s a film I saw on rental last year which I enjoyed so much an eventual Blu-ray purchase was inevitable.

The film is the very epitome of cool. The retro-synth soundtrack is gorgeous, something that, with the neon-drenched visuals, instantly evokes memories of the days when Miami Vice was the coolest show on television. Drive is a film-noir/pulp fantasy of a Mysterious Stranger who befriends and protects a troubled family beset by hostile forces; a plot familiar to anyone who has seen the Leone/Eastwood westerns of the ‘sixties.  Indeed there is a lot of Clint Eastwood’s early screen persona of cool, silent wrath in Ryan Gosling’s performance. Of course the story here is set in a modern metropolis, the horses replaced by cars, but its cinematic roots are clear.  Throw in all manner of further references to Walter Hill’s The Driver, or Michael Mann’s Heat, or the shocking moments of violence of Martin Scorcese’s Taxi Driver, and you have a film that is quite mesmerising.  It isn’t a gangster movie, or a car-racing movie, or a love story, or a crime thriller… and yet it is all those things and more. Watching it again after so many months, I was surprised how sophisticated,  and yet at the same time simple, the whole thing is. So much is told in the long silences, its a truly cinematic movie. Its one of those movies that you just don’t want to end,  and when it does, you want a sequel… and yet you don’t. It’s perfect as it is, and too many good films have been spoiled by sequels.

Ryan Gosling is remarkable in exuding heroic cool, and while he may seem a bit too pretty to be real (something true of too many male actors these days), his glacier-like face is well served by those emotive eyes. Carey Mulligan does well as his love-interest and the unwitting catalyst of all that unfolds. The supporting cast is excellent- Ron Perlman may be the main bad-guy of the film but it is his partner, played by Albert Brooks, who is the real surprise to me.  Played with an icy,  devastatingly business-like attitude to doing what simply has to be done, regardless of how morally wrong it may be, his character is a thing of modern urban nightmare.

Refn has a new film out soon, Only God Forgives, in which he has again teamed up with Ryan Gosling. The trailer looks electrifying. I can hardly wait.