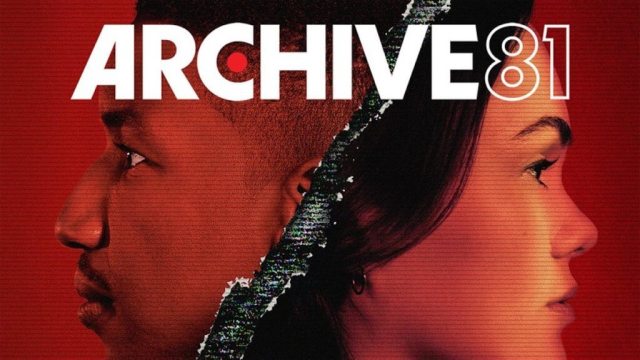 Archivist Dan Turner (Mamoudou Athie) is offered a job restoring a collection of damaged videotapes recovered from a New York building fire of 1994. As he painstakingly restores each tape, playing each one to convert them to digital files for his mysterious boss/benefactor Virgil Davenport (Martin Donovan), Dan finds himself gradually opening up a mystery. The tapes were made by a documentary filmmaker, Melody Pendras (Dina Shihabi) and are a record of her investigation into a demonic cult before she died in the fire. As the horrifying mystery unravels across the tapes, Dan realises he is caught in a new conspiracy linked to those events of 25 years ago: and begins to doubt his sanity, or even reality, as the past and present begin to blur and the images on the monitor screens seem to take on a strange life of their own.

Archive 81 is one of those shows that seem to come out of nowhere- there is so much content dropped weekly on Netflix, I often wonder what I miss, never mind those shows that I KNOW I’ve missed that I haven’t gotten around to yet, like both seasons of The Witcher, all three seasons of Dark, its a list that is getting silly: there is only so much time. Is that the true legacy of the streaming wars- not so much watching everything we want to, but just somehow managing what time we have the best we can afford?

So to Archive 81 then; this is one of the best things I’ve seen in ages. How curious that having been blown away by Midnight Mass toward the end of last year that this year opens with another great horror series? Archive 81 is genuinely creepy and disturbing with some very effective twists and surprises and a brilliant premise that is part Videodrome, part Lovecraft – throw in some reality-shifting Philip K Dick and its a killer combination. This thing caught me right from the beginning, with its wonderful, moody soundtrack by Ben Salisbury and Geoff Barrow (Ex Machina, Annihilation, Devs) and it just didn’t let up. Maybe part of it was the sense of nostalgia, with its use of videotapes and other arcane forms of media bringing pangs of longing (the scene where someone rips the shrink-wrap off a Scotch blank VHS tape!) that nobody born post-millennium can ever hope to understand. I’ve seen people look at old audio cassettes wondering what they are for or what they do: I wonder what they think about these plastic bricks housing brown tape.

So the premise is great, the scripts for each episode were all very good, the characters interesting, the casting excellent, the mood relentlessly tense. Its a brilliant eight-episodes-over-three-nights binge watch but then… but then… Well, you know what’s coming, don’t you. The only thing that spoiled Archive 81 was, they didn’t stick the landing- the ending was nowhere near as satisfying as that of Midnight Mass, and proved something of a let-down. Not that it wasn’t good, its just that… well, it wasn’t an ending.

The showrunners felt the need to leave things open for a second season, teasing us instead of… Well, its hardly anything new in the world of television. I suppose so many shows get pitched and never see the light of day, its got to be tempting that, once you’ve got the greenlight you try keep it going as long as you can. But I did feel it compromised Archive 81, robbing it of the finale it deserved- you know, like a finale that had a definitive ending, damn it. You can have that and still leave a cheeky tease, but how episode eight ends…

They could have been a little smarter, and maybe braver. I rather suspect we’re just going to get a  Archive 81 Season Two, but you know, we could have gotten Archive 82 or Archive 88 instead.

Don’t get me wrong, its not a deal-breaker and Archive 81 is absolutely worth your time but while its very, very good, its just frustrating that it could have been bloody great. What is it with storytelling these days? Is ‘The End’ becoming something like a dirty word now?

4 thoughts on “A Lovecraftian Videodrome”