Weird Tales, for all REH’s popularity with readers and the quality of his ground-breaking fiction, was poor at paying what was due. After his death in 1936, Weird Tales still owed Howard’s estate over a thousand dollars – which in those days was a tidy sum. Frustrated at earnestly writing some of his best work for that pulp magazine (his groundbreaking Conan tales among them), by 1934 Howard felt forced to look at other markets for his work, markets that would pay what was due in more timely fashion. This would entail attempting to work in new genres, and not all  such experiments would prove fruitful.  “Lately I’ve been trying to write detective yarns, something entirely new for me, and haven’t had much success, ” Howard wrote in a letter to H.P.Lovecraft in late 1933.  Howard was refering to his tales of Private Detective Steve Harrison, hard-boiled crime fiction tales. Four of nine Steve Harrison tales would eventually sell, but Howard himself felt that it was a struggle from the start. “I have defintely abandoned the detective field,” he later told Lovecraft in a 1936 letter. “I can scarcely endure to read one, much less write one” he added. 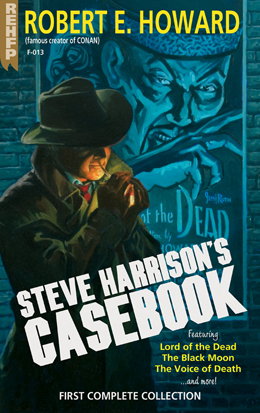 It would be easy to dismiss Howard’s crime fiction as an understandable failure- afterall, this was the guy whose fantastic fiction, horror tales and heroic fantasy is what he is most famous for, and would on the evidence of those stories  hardly seem suited to writing crime stories.  But the hard-boiled detective stories that were popularised by Dashiell Hammett and company were not that far removed from Howard’s fantasy and serious westerns in style and atitude. Howard has been referred to before as being a ‘Hard-boiled Heroic Fantasist’. So Howard and crime fiction is not neccesarily the ill-fit that might be expected.

Graveyard Rats, which I read last night, was the last of the four Steve Harrison stories to be sold during Howard’s lifetime. There’s not much detecting but plenty of mood, action and horror in this tale, and while it can be seen to be an awkward fit for Howard, it nevertheless has some worth. Some of the imagery seems more Lovecraft than Hammett, with severed heads, vicious hordes of corpse-devouring rats, lightning-lit graveyards and a house and villain consumed by an inferno at the tales blood-soaked conclusion.

The story begins with Harrison embroiled in a hill-country feud (very REH) between the Wilkinsons and Middletons. The last of the Middleton’s, Joel,  has killed one of the four Wilkinson brothers a few days before and Harrison has been hired to hunt down Middleton before he can fulfill his pledge to kill the remaining brothers. One of the Wilkinson brothers, Saul,  awakens with a start in his room in the dead of night, convinced someone is about to kill him in the darkness, his shredded nerves rattled by the opened door to his room and the frantic scampering of a rat on the floor. Howard ably desribes the mad tension Saul feels as he searches the darkness convinced death is lurking in the blackness. Eventually he fumbles for the lamp and his hand, groping in the darkness, touches the hair on a human scalp. With a terrified shout he fumbles to light a match, and in the light of a  candle finds the severed head of his brother John, he who had been  buried just three days before. The sight blasts Sauls terrified brain and plunges him into madness. Harrison, awoken by Saul’s screams reaches the grisly scene and decides to examine John Wilkinson’s grave.  The graveyard scene, complete with a lightning storm and hundreds of corpse-eating rats, is pure REH; a vivid nightmare of tension, mystery and gritty action.

Graveyard Rats seems more in common with Howard’s serious Westerns than hard-boiled detective fiction, but it’s dark, violent story is certainly gripping.  Yes, it feels like Howard is ill at ease and struggling some, and it’s certainly a lesser Howard tale when compared to his more accomplished historical crusades adventures and best fantasy/horror works. But even a lesser Howard tale is more than worthwhile, and the tale rushes by at breakneck pace. Some of the imagery is horrific and startling. It’s true- no-one could write a tale like this the way Howard could; a natural storyteller, even in a genre he struggled with.

One thought on ““Graveyard Rats” by Robert E.Howard”