There is a scene in the third season of Westworld… well, there’s not just one, actually, they do this shit a few times and it raised my blood pressure every time… there’s a scene in a boardroom with this guy, Serac (Vincent Cassel in very fine form) holding court, I think he’s sitting down, stands up, the scene is tense, there’s a confrontation, and a character snaps and shoots him in the head and… the bullet goes through him and he flickers and he’s revealed to be a hologram, a repeated gambit of his. But how does this even work? Is his hologram ‘projected’ by hidden cameras, and if so, where are they, why can’t anyone else see them ‘projecting’ the Hologram and how does it work when he’s outside (they do that, they have someone chatting to a hologram outdoors). How does his voice emanate from an empty point of space where his holographic mouth is rather than from a loud speaker across the room, and how the hell does he hold eye-contact with someone when he’s not really there? How does he enter the room,  how does his chair move as if taking his weight, how does…

How does the person projecting the hologram from some other location even ‘see’ the other people in whatever space the hologram is projected into? He may have a screen in his villains lair that he is looking at but what’s filming that image to broadcast to his screen?  Its just too much like magic to me, and over the years as writers get lazier, its all getting sillier as they take things further and further (what was that ‘hardlight’ bullshit they had in Star Trek in which Holograms could actually pick up items and touch people?).

I know, I know, its just a sci-fi show. But its not space fantasy like Star Wars, is it, a show like Westworld. Its a more adult, considered and thoughtful piece, a show of bold, often existential ideas such as self, memory, humanity, free-will, purpose, programming biological and digital, all sorts of reflection on technology good and bad. But they slip into these silly sci-fi tropes sometimes, betraying all the good work with lazy writing. Don’t get me wrong, I adore BR2049 but I have such a hard time all the way through that film rationalising Joi and how they portray her in physical space. They sort of nod to it by us seeing lights ‘through’ her but that being said, how does she magically just ‘be there’ in a room or Spinner etc? I’d have an easier time if they just revealed she was something in K’s head and he was ‘seeing’ her in the outside world through his imagination, that he can ‘see’ her but nobody else can. But hey, what am I to do?

One of the things that frustrated me regards the holograms in Westworld is that in a number of episodes they actually manage to rationalise the technology, in that people could only see them when wearing special glasses- you can see something flickering on the interior  glass of the specs so that you can accept them ‘seeing’ 3D imagery in front of them via the glasses, possibly being projected onto the eye’s retina or on the glass itself like a HUD kind of thing. But I have to suspect the showrunners and writers got a bit carried away with it, pushed it too far when suddenly there’s a hologram walking around that everyone seems to see and we’re in bloody Star Trek territory.

I have a nagging theory/suspicion that the way we can tell that the whole third season of Westworld (and by extension seasons one and two too) is actually a simulation within a simulation like a stealth mimicry of The Matrix. You read it here first, just pretend to be surprised when Neo turns up in Westworld Season Five.

Anyway, I may eventually get around to an actual review of Westworld‘s third season, but you can possibly tell by this pointless stream of consciousness/geek rant that I have so many conflicting issues with it. I feel like Indy moaning about snakes, only here its me moaning, “Holograms. Why did it have to be Holograms?”

My copy of the third season of Westworld on 4K UHD arrived today- and its never been clearer how physical product of films and television shows on disc is becoming less and less of an interest to studios and distributors. Remember the glory days of any HBO series on disc? The ill-fated series Rome on Blu-ray actually came in ornate wooden boxes (so fancy they still take a pride of place on my shelf all these years later), the first few series of Game of Thrones came in fancy sets embellished with clear plastic slips with printed sections and embossed cases… over the years with each season those GOT sets became less fancy, but nowhere is the decline of disc packaging more obvious than with Westworld. 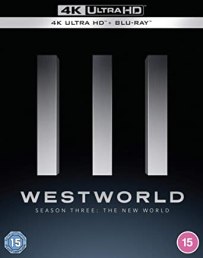 The first season came in a fancy tin. The second season in a less-impressive, but still fairly quality, embossed slipcase with a sturdy digipack. The third season? A standard 4K Amaray case inside a very slightly laminated, suspiciously thin cardboard slipcase. Over in the States, fans are moaning about the packaging but at least their case seems to be lenticular and embossed, indicating some limited effort which is more than our cheapo edition (well, I say ‘cheapo’ but I note the price of the set hasn’t been reduced compared to earlier seasons when they came out).

There was a time when physical product was something of a premium product, certainly compared to digital downloads, but I’m afraid some kind of parity is coming, although again I note that parity does not extend to the price. Oh well, sign of the times, I suppose, but all the same, poor show HBO/Warner.

Mind, I suppose I should just be thankful I get the series on a physical 4K set at all (we never got a 4K Watchmen series or 4K Chernobyl), so hey, I’m not going to complain too hard, for fear that season four when it eventually comes in a few years turns out to be digital-only, but I’ll just close my eyes a moment and remember the good old days of 2010 – 2015. Some may cast their memories further back than that, there have been some lovely imaginative examples of disc packaging over the years, especially during the DVD glory days, but I guess those days are long gone now. You just have to look at my three seasons of Westworld in my shelf. They actually look like they come from three entirely different tv shows.