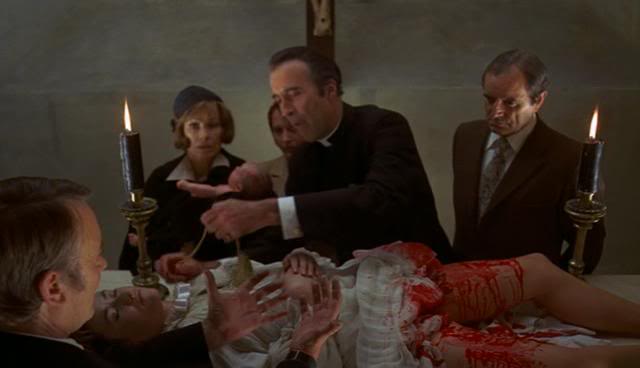 Until the recent revival of the studio’s fortunes, I believe that To The Devil A Daughter was the last Hammer film produced for theatrical exhibition. Its had a pretty poor reputation, but it wasn’t this film that ‘killed’ the studio- the damage had been done long before this film was released to indifferent/scathing critical and popular response.

I must confess that when watching it, well, the first half quite impressed me. I think it was all the location footage, not a dodgy gothic set in sight.  Indeed it seemed quite an atypical Hammer horror, set in contemporary times and in real-world locations with some quite interesting cinematography. Losing the period gothic sensibilities of so much Hammer output felt like something of a culture shock though. The film was clearly an attempt to ride on the success of films like The Exorcist, being an occult horror (ostensibly based on a book by Dennis Wheatley) set in the real-world with much of the old Hammer gore and titillation  lacking (there’s one moment at the end, when Nastassja Kinski undresses as a temptation to Richard Widmark’s character, that ‘feels’ like a proper old Hammer with a bit of fire in its veins, but it’s hardly a momentary diversion). It feels like an Hammer film lacking its own identity- if it had maintained the gore and sexual intimations/nudity of the Hammer classics but brought that to the real-world scenario here, then it might have been more successful. As it is, its pretty lacklustre, a horror without real bite, almost more old-fashioned than the Hammer classics of the 1950s and 1960s.

Oddly, it features a birth sequence (and a rather weird reverse-birth dream sequence) that prefigures the chestburster of Alien but it is presented so ineptly it looks funnier than it does scary, perhaps a sobering reminder of what Alien might have been had it not been handled so well with an A-list director and budget.

What really sinks To The Devil A Daughter is the script. It doesn’t seem to have one. Instead it seems to have rough ideas and plot-points, like an early draft that needs refining. Characters come and go and there are hints at a Satanist cult/mystery with Christopher Lee looking menacing, but really it doesn’t make a lot of sense and, crucially, the film lacks a credible conclusion. It just ends. Its really quite bizarre and the film-makers must have known they were in terrible trouble when they had the final edit. The big bad devil-worshipper Christopher Lee just… vanishes… off-camera too. He’s just there, has a stone thrown at him, and then he’s gone. Its appalling. Its as if no-one had quite finished that last page of the screenplay… it was just blank, and they kind of went with it. I’ve seen some crazy non-endings but this one is quite maddening.

So frustratingly, here’s a British horror film that might have been something great but ends up rather pretty terrible and forgettable. Most everyone seems embarrassed to be seen in it (besides Nastassja Kinski, who seems to be enjoying herself regardless) and the effects boys had a budget more akin to a BBC Dr Who show of the time. It needed more time, a proper finished script and a bigger budget to manage the films obvious aspirations to be a British answer to The Exorcist. Instead it is really poor, and cheap. A sad end really. At least with Peter Cushing in Richard Widmark’s part it might have been a bit fun.