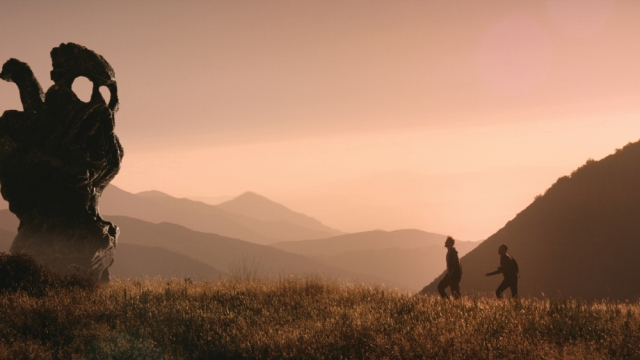 Actors/writers/directors Aaron Moorhead and Justin Benson return to the setting of their earlier sci-fi/horror jewel Resolution with another finely crafted tale that perhaps doesn’t really benefit from its larger budget/scale and cast as much as one would think. The strength, for me, of the earlier Resolution was its enforced small-scale; its intimacy and almost claustrophobic sense of remote horror. The Endless opens things up and widens the original’s perimeters and to me it loses something along the way.

Others, though, may have been frustrated by the limitations of Resolution and in particular its ending, and therefore will find The Endless a much more rewarding experience. Certainly there’s a bigger scope, and more ambitious visuals.

Two brothers, Justin and Aaron (played by the film-makers themselves albeit exchanging names) are escapees from a UFO doomsday cult out in the desert- ten years have passed and while Justin has adjusted to living in the ‘normal’ outside world, Aaron has his doubts and is missing his extended family of cultist friends. When a videotape arrives from the cult, seemingly stating that a fabled ‘Ascension’ has either happened or is imminent, Aaron convinces his brother that they should return to the cult just for one day. Hoping what they find will finally make Aaron realise they are better off well away from the cult, and achieve some sense of closure, Justin agrees.

What they find back at the camp where the cultists live on the Indian reservation is at first bewildering, almost comforting (for Aaron at least) but there is, always, a sense of unease (particularly for the doubtful Justin) at the apparent idyll and hints of something being terribly wrong.

The return of Michael (Peter Cilella) and Chris (Vinny Curran) from the earlier film is a very welcome surprise, albeit rather bittersweet. I must confess I always felt a deeper emotional connection with these two compared to the two brothers Justin and Aaron, and the return of the protagonists from Resolution for me only intensified some of my issues with The Endless, but it was certainly very welcome (if disturbing) to learn of their fate after the closing moments of the earlier film.

At any rate, whilst I’m not at all convinced that The Endless was as satisfying as Resolution, it remains an impressive and satisfying low-budget sci-fi/horror with much to recommend it. Arrow’s Blu-ray release that currently (in a limited edition) contains both films is a great package not to be missed, with multiple commentary tracks on both films and various featurettes/interviews that I have yet to delve into.

Resolution, a low-budget indie sci-fi/horror film with allusions to Lovecraft and others, features as an ‘extra’ on Arrows excellent recent Blu-ray release of The Endless (2017). As the two films are linked by location/themes/characters I watched Resolution prior to the main feature.

Its quite true of the horror genre that low budgets can be a great asset- necessity, it is often said, is the mother of invention, and this film is a clear example of when film-makers make such a lot of so little. Structured rather like a play its mainly a character piece, with a limited cast (essentially just two actors dominate the whole thing) its a psychological horror which starts fairly normal but then slowly starts to suggest all sorts of strange and horrifying possibilities about the nature of reality. I’d take films like this over the standard Hollywood nonsense of horny teens caught in the woods being preyed upon some monster, any day of the week.

Set on a remote Indian reservation, Resolution tells the story of two old freinds, Michael (Peter Cilella) and Chris (Vinny Curran) who reunite in a remote half-completed lodge- Chris is a drug addict well on the way to killing himself and Michael is making one last try at getting Chris clean, taking the opportunity of their isolation to force him to go ‘cold turkey’ over a week. A UFO doomsday-cult nearby suggests that there may be weird things going on in the area, and Michael begins to stumble on strange discoveries and occurrences.  As Chris starts to become more lucid and free of his drugs influence they both begin to realise that they are being watched by something unseen that somehow communicates by offering them ‘found footage’ video etc from what appears to be their future- or indeed, alternate futures. As the mystery unfolds it becomes clear that their lodge, the cult and environs have a darker, stranger history than they can imagine.

To say any more would do the film a disservice, as its a great little movie with some big ideas and on the whole it is executed extremely well that belies its budget and scale. I guess you’d call this ‘intellectual horror’ rather than ‘graphic horror’, and it certainly reminds me of good old ghost stories that suggested more than they showed.

There is a great sense of the cosmic unknown of Lovecraft’s better work and the leads are just simply brilliant, frankly, really doing well with the material. There is a warmth and familiarity between the two leads that convinces of the bond from their shared past, and the strangeness of their isolated location is conveyed well. A few other minor characters make some telling impact, too, making it a rather perfect little horror movie. I liked it very much- it keeps the viewer guessing right to the end and is only slightly marred by a wtf ending that benefits, in hindsight, by having  the latter movie The Endless allow the story to follow on some years later with a largely new cast of characters and some kind of, pardon the pun, actual resolution.

One of the genuine surprises of the year.