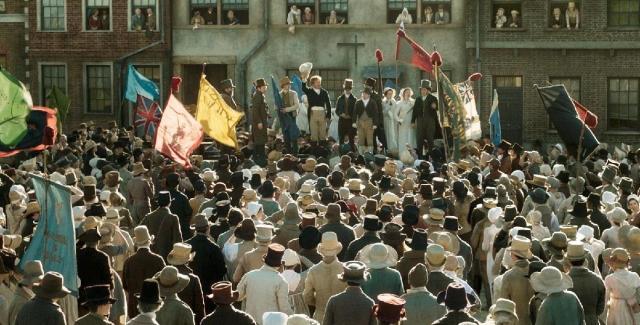 Peterloo is an often gripping and very troubling account of real events that echo across the centuries to current events that we see on the news from Hong Kong every weekend. The more things change, the more they stay the same, it would seem. On 16 August 1819, during what passed for a nineteenth-century pro-democracy demonstration in St Peter’s Field, Manchester, an apparently rather drunk band of cavalry and yeomanry (whose self-congratulatory commander was elsewhere, literally enjoying a day at the races) charged wielding sabres into a crowd of over 100,000 unarmed people who were there to hear the words of famed orator Henry Hunt (Rory Kinnear). The troops killed eighteen and injured over six hundred, and the British Government was very pleased with itself, jailing Hunt for two years while not punishing anybody for the deaths.

While I was impressed by the sense of time and place, I did have a few issues with the film. While the events are abhorrent and unthinkable, they almost seem to descend into farce and caricature, like something from a Blackadder episode (the Prince Regent such a self-entitled Royal ass it’s almost too much to take seriously). It may very well be historically accurate in all respects, and if so it’s only all the more damning, but it skirts the event horizon of believability. Maybe we’ve just moved on so far with reforms since (albeit some might argue still not far enough) that those days seem too distant and from some other world. Maybe we’re fooling ourselves, considering events in Hong Kong, that things like this are wholly of the past, but the near-farce demonstrated in the film does it a disservice I think. At times it feels almost too camp, almost too Monty Python.

Peterloo is also at least a half-hour too long. While the political and intellectual arguments do require some airing, the lengthy debates at clandestine public meetings or in Parliament are very long and the endless talk, talk, talk proves wearisome, doing the film few favours, although I am sure director Mike Leigh was simply trying to explain some of the intricacies of the political climate and views. A leaner film might have served it better- as it is, it runs two and a half hours, and while I do not mind long films,  it feels like a long two and a half hours. 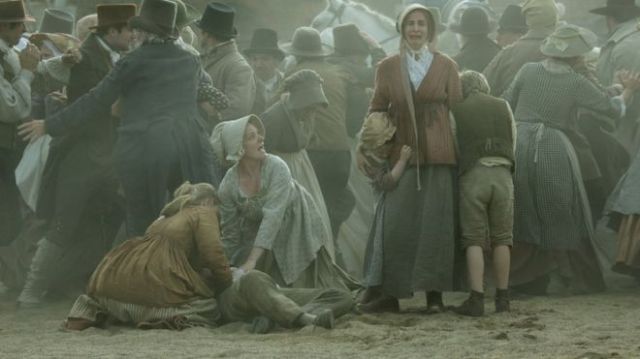 I also missed what I expected to be some text at the close of the story to explain what happened next (instead I had to revert to google). It proved a little frustrating, that after spending so long in that milieu with those many characters, not to see what happened afterwards, what the repercussions were, seems an odd oversight by the film makers. The film is left bereft of perspective – imagine had Glory ended with the bodies being dumped into the mass grave with no text to explain how those events depicted in that film impacted the fortunes of that civil war and racial politics. The fade-out straight to end credits seems like a mistake, an error of judgement, to me.

So a not wholly-successful film I think. I suspect it may have gotten away from Leigh, that he lost control of it somewhat. Stil, its harrowing but educating viewing and certainly worth a watch, but I am left with the feeling that the events deserved a better film, somehow. Perhaps if I watch it again I may feel differently.