Why is there a new live-action Disney Beauty and the Beast? It is a valid question, surely. I can only imagine it’s something to do with making money- well of course it is, otherwise it would be about adding something new to the cultural zeitgeist of the 21st Century and, well, this ain’t. Its surely also rather more about furthering egos and careers at the same time as Disney continues its almost incestuous trend of rebooting its back-catalogue of animated classics (previously rebooting Cinderella and Jungle Book, and I suppose Sleeping Beauty in its Maleficent, although I’d give that film points for trying a new angle).

In many respects, this Beauty and the Beast is just another example of an ideas-adverse/intellectually deficient Hollywood in action. And I’m afraid to say, it works: depressingly, this film is the biggest-grossing film of this year, so far. Currently something in the region of $1.2 billion worldwide. So more Disney reboots seem inevitable, for one thing- if it ain’t broke, don’t fix it, as they say.

Watching this film was a somewhat bizarre experience of re-experiencing something I had never seen before. Indeed, at its worst, it seems to follow so closely the original 1991 film, its as if that film was a pre-vis animated storyboard such as they use on many films these days. At its best, the film diverts somewhat, with three new musical numbers and added back-story for some of the characters, the brooding feeling of deja-vu dissipating somewhat as something actually new appears.

But it is such a strange viewing experience, caught in some kind of Philip K Dick-style alternate reality, wondering what the bloody hell is going on. I knew very little of this film going into it, and actually wondered if it would have any musical numbers at all. In hindsight, I must have been some kind of bloody idiot. This is the 1991 Beauty and the Beast done in live-action, musical numbers and all… well, I say live-action; there is an awful lot of digital set-augmentation, digital characters and post-production tinkering of the image in general that at times it looks more animated than live-action, resulting in an almost painterly style to the image that, while it may be pretty to look at does actually make me wonder what actually defines as ‘live-action’ these days.

This 2017 edition is not a terribly bad film by any means, and it does have its moments, but its very existence is rather depressing, and it’s huge box-office success even more so, for what that success portends. I do find it very disheartening how easily the current generation of entertainment industry ‘luvvies’, from actors to directors to producers to craftsmen so readily exult in cannibalising the work and success of those that came before them. As if rejoicing that there is nothing new under the sun and how easy it is to retread paths already taken, basking in the box-office glow that all that audiences want is more of the same but with added sparkle.

I hate the new Star Trek reboots, despair at ‘new’ Alien movies and endless POTC films and Transformers films and all the rest. I really should be concerned that even my beloved Blade Runner is not impervious to current trends. They recently released a ‘new’ Spider Man film and I didn’t bother to even go see it; the thought never occurred to me- a sixth Spider Man film already, and the second reboot too, it just feels ridiculous.

Being a film-lover and writer of a blog such as this is, films like this Beauty and the Beast, as efficiently made as it is, and all the other reboots and remakes and sequels and prequels feels like a never-ending tide. Of course it is too sweeping a generalisation to suggest that this is all that there is, but it is all rather alarming. Yes there are ‘new’ films being made and not all reboots are pointless. But this tide is just getting stronger and I wonder how long it might continue or where it ultimately leads. 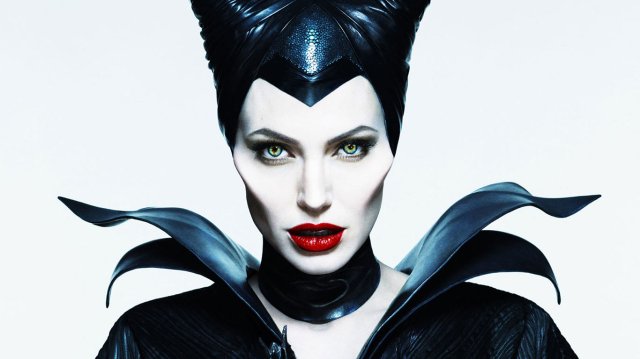 Weird thing watching this film, it seemed like the blu-ray player was on fast-forward or something,or somehow skipping chapters. It was just, well, odd. Its a nice film and everything but, well, it seemed edited down to within an inch of its life as if in some mad drive to get it down to as near to 90 mins as possible. Unfortunately it has a result that the film lacks much substance, or  the subtext that it perhaps would otherwise have.There is a good film here, but also one that might have been great. As the narrative moves forward years race by, characters come and go and never return (Sleeping Beauty’s mother is woefully treated in particular) and before you know it, the film is over, suffering because of the films alarming brevity. Its all very pretty but rather vacuous (hmm, something that could be said of so much Hollywood product).

It certainly has great credentials. Angelina Jolie in superb scenery-chewing form as the titular character in a striking make-up design created by Rick Baker, no less. A visual style and photography that is never less than breathtakingly beautiful, with a sublime score by James Newton Howard that harkens back to the pastoral beauty of Debussy and Jerry Goldsmith’s classic score for the similarly-themed Legend.  It has such a lot going for it but ultimately stumbles. A lack of faith on Disney’s part, perhaps? There is certainly all the signs of a troubled production and plenty of second-guessing in post.

Perhaps its the script. As the title would suggest, the film is a retelling of Sleeping Beauty but from the perspective of the evil Maleficent. Or not so evil in this case, as again we bear witness to the modern world’s very PC-friendly revisonist view that bad people aren’t really evil, but rather misunderstood and victims of circumstance themselves. They’ll be telling me that Darth Vader is really a Good Guy deep down next, wait- oh yeah, they even turned that black-clad harbinger of Evil of The Empire Strikes Back into a good guy -with mother issues, no less- too. Agh.

So Maleficent is hardly anything new there. The problem with this film though is that while it does an acceptable  turn at explaining her fall from sweet flying fairy into dark vengeful witch, it lessens the impact by skimping on the surrounding characters, particularly short-changing Stefan, the cad who steals her heart -and eventually her wings in his drive for power and glory, Stefan is left a simple two-dimensional character when the script could have given him some depth and pathos as he realises he left behind what he really wanted in favour of a kingdom and life that left him unfulfilled. They are two childhood friends and later lovers whose fates are entwined forever, their romance turning to bitter betrayal- there is plenty to chew on, particularly when they meet again over the years after. They share a history that is pretty much mulched into a simplistic black and white tale when it should have perhaps been one of regret and what might have been. The funny thing is, the seeds of such complexities and depth are clearly there, its as if they were filmed but just that they are missing in this edit leaving the film rather disjointed.

But fairytales are just for kids, right? We don’t need any complexities and depth of character in a film that is meant to sell toys or amusement park rides something. I feel a dark trembling in the Force, kiddies,  Disney even now producing Star Wars 7...