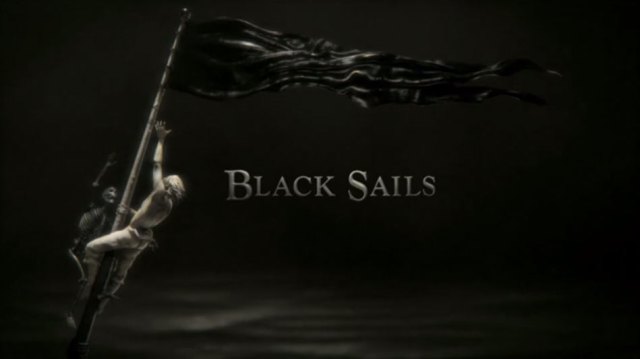 I’ve been looking forward to Pirate mini-series Black Sails for awhile now, mostly, I have to admit, due to the involvement of Bear McCreary (Battlestar Galactica, The Walking Dead, DaVinci’s Demons etc)on the show’s scoring duties.  McCreary set up his own label last year and has used it to distribute fairly definitive soundtracks of his tv work even when the shows are still on-air, and his Black Sails album was released in January soon after the series launched in America. The Black Sails score is primal, rough, almost chaotic- in melody it reminds me of the great Battlestar Galactica (across its five seasons and soundtrack albums the most sophisticated, complex and rewarding television score I’ve ever heard) but with its simplistic orchestrations (historically quite accurate) it manages to sound fresh and spontaneous and would appear to fit the show like a glove.

Well, appears to, as I haven’t seen the show yet. I’ve been waiting for a channel to be announced with UK airdates and the silence has been deafening, but now Amazon has announced that it has bought the series and will have it available for subscribers to its Lovefilm/Amazon Prime services on April 4th. That’s all eight episodes too. I won’t have the time, but if I did, I would be able to watch the entire series next weekend.  Its like being gifted a boxset. Whereas DaVinci’s Demons season 2 starts April 4th on Fox with me having to watch it on a traditional weekly schedule.

Things certainly seem to be changing with how people watch television content, and players like Amazon and Netflix are making strong moves. How successful this is, or how it even pays, is something for debate. I already have my doubts on how Sky do things and how it effects its content, never mind the even lower subscriber base that Amazon and Netflix enjoy. The BBC famously cancelled Ripper Street a few months ago (eventually renewed in a deal with Amazon, funnily enough) due to perceived low audience figures of a few million, while Sky’s top-rated show at the time, Arrow, had just 400,000 viewers and was deemed a success.  My concern is that although Sky are happy, what does it do for the mainstream audience perception of shows like Arrow here in the UK when so few people actually get to watch it or perhaps have even heard of it? Or are people just turning to DVD/Blu-ray boxset releases now?

I recall back when the big networks here, BBC and ITV regularly showed American hit shows and they had huge audience figures/media attention (remember Twin Peaks, or JR getting shot in Dallas? Doesn’t happen anymore).  The producers of the content are happy, they get their money (and Sky for instance pays handsomely, easily outbidding the BBC etc), but while Game of Thrones is huge, imagine how even bigger it would be if it was appearing on BBC 1 at 9pm? Television is so fragmented these days. So many programmes lost on so many obscure channels. One of my favourite shows of the last several years was Chuck; it was a funny adventure show with great characters, it was a family show, almost retro in its approach. Would have been a perfect fit on something like BBC 2 primetime, but I guess most people here in the UK never even heard of it. I don’t think the last season has ever even been aired over here; I had to import the Blu-ray to find out how it all ended.

How does such diluted availability of so much content effect the financial viability of that content? How many shows failed that never had a chance, how many great shows do we miss simply because we don’t know if/where/when the show is on? Is this the future of television? Its a bit bewildering.

So anyway, I have to wonder how many people will be watching Black Sails this weekend… but I’ll certainly be giving it a shot.