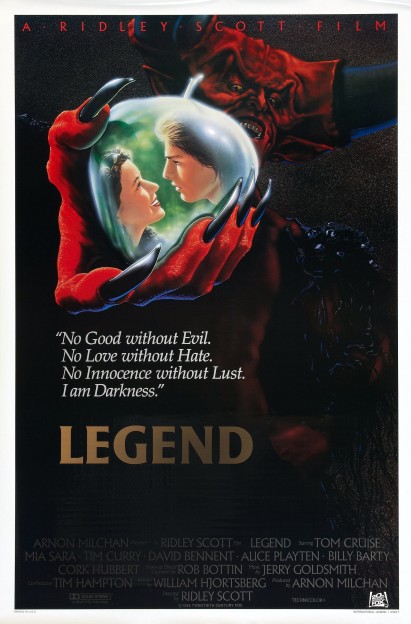 Oh, Arrow, you tease. Those postcards for an Arrow edition of Legend had me all kinds of (mildly) excited. Legend is a pretty damned broken film in any of its cuts but goodness it sure is pretty, and a 4K edition would be such eye-candy. Alas it seems never to be.

Yesterdays press release actually confirms the worst- Arrow’s Legend in September is a US-only release of a remastered edition of the horrific American theatrical cut (frankly unwatchable in my opinion) and the image-impaired Directors Cut (which is basically a workprint, not a ‘restored’ Directors Cut that many are), on Blu-ray as the only elements good enough for a 4K belong to the European cut that Fox (and therefore now Disney) own and the mouse as usual isn’t playing ball. So not only no 4K, there’s not even an Arrow release over here of Legend as they can’t license that European cut from Disney. Man, its so hard not to think of Disney as some kind of Evil Empire or Bond villain these days, its like they have a corporate memorandum to piss me off.

The tenth season of The Walking Dead recently commenced, and I felt duty-bound to watch the first episode. As I have remarked here before, after so many seasons of The Walking Dead, it has felt something of a chore carrying on (surely season six was the last time the show was decent), but really, stopping now makes all those years/seasons seem such a waste. So grit your teeth and bear it somehow seemed to be the only course of action, seeing it through to the bitter end. An end had to come, surely.

But there was an eighth season, a ninth, and now a tenth. Still no end in sight, either, if the truth is told. I think the show runners seem to believe this thing can run forever, or at least pay for some more swimming pools, summer houses or luxury cars. There certainly seems little other point to the ordeal, and ordeal is what it has become. Even the cast look interminably bored, or perhaps they are all just distracted by thoughts of swimming pools, summer houses or luxury cars themselves.

So anyway, I dutifully found the Walking Dead folder on my Tivo, which had already recorded three episodes of season ten before I finally got around to it (that’s a certain sign of how grim it has become, when after a long break a new season begins and I’m in no rush to watch it) and off I went in some vain hope of some fresh direction, some excitement, something new.

But no. Its the same bloody show. Its like they just don’t want to save it. The same characters going through the same old motions (except Negan is a gardener now, as if that’s what the show feels is progress/development). Open with some zombie action, a training exercise that, you know, is sure to go wrong but our heroes manage to survive. Various shots of zombies getting stabbed, sliced and diced. Christ, even the zombies look bored. How many ways can you depict a walking, shambling dead guy and how many ways can you stab, slice and dice one? Its not as if anybody is ever in any danger, and at this point the whole routine has become so tiresome the thing is becoming a parody of itself.

Mind, it was probably already that a few seasons ago. The Walking Dead is a show that was creatively dead a few years back, its just become a zombie itself, a tv show way past its termination date, shambling along. Its very title has become ironic.

I feel like a zombie myself, sitting here watching it. I think all the fans still watching it are zombies at this point, watching the show from some kind of habit, loyalty or stubbornness. I’m put to thinking of that scene in George Romero’s zombie classic, Dawn of the Dead, with all the zombies in the shopping mall, and a character reflects that the zombies are repeating the actions of their old lives, when the mall was an important place in their lives. That’s us, now, watching this show.

I remember when the zombies were interesting, when they were dangerous, when there was a sense of tension when encountered. That’s long gone, now, and when that happened the show lost its heart, its pulse. The show is a zombie going through the motions and so are we, watching it.

So this first episode ends, and I go back to the Tivo and the second episode is… oh shit, that’s it. Its a flashback episode. The hell with this shit, they are still cranking out that old routine of stretching plot-lines out forever. There’s a hint, just a hint, of something happening at the end of the first episode, and then they go abandon it for a flashback, making us wait for episode three or four for anything even approaching a development.

Well, the hell with that. I’m pulling the ripcord baby, I’m out. Delete episodes two and three and cancel that series link. I’m done. I tried, God knows I tried.