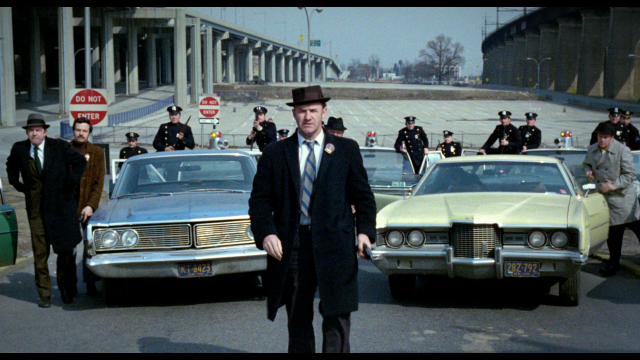 Staying in the 1970s for the second of my Fifty Great Films, I re-watched The French Connection last night, this time on Blu-ray. Actually, I should point out the disc is the second of the film’s Blu-ray releases, an American multi-region disc that restores the original ‘look’ of the film (the first Blu-ray release, which is the only one available here in the UK far as I know, had extensive ‘director-approved’ colour-timing changes that enraged purists).

Time has been very kind to The French Connection. It’s gritty docu-drama style must have been eye-opening back in 1971 and proved to be a game-changer for cop thrillers, and today over forty years later it stands, like Taxi Driver does, as an historical record of a time and place long gone. Those cars, the music, those almost apocalyptic streets! Its a sure sign that with the new decade films were changing, and that a New Wave was about to hit Hollywood-  the film has a sense of reality far removed from that of a Hollywood thriller of the time. This would follow through to a downbeat ending that must have seemed shockingly abrupt back at a time when the good guys always ‘won’ and the bad guys always got caught.

New York was such a seedy, broken city back then, particularly in the locations chosen for this film, and there is an air of authenticity to the whole thing that is endlessly fascinating. Of course, that isn’t hurt by the fact that the film is based on true events, in which two cops stumbled upon ties between New York mobsters and French heroin traffickers, their subsequent investigation leading to one of the biggest illegal narcotics seizures ever.

You simply cannot take your eyes off Gene Hackman in this film- his presence dominates everything, and his performance rightfully won him the Oscar for Best Actor. Really, you cannot take your eyes off him. There is an extraordinary truth to him in every scene; he looks so beat-up and life-worn, a flawed,  middle-aged cop working on rough streets- I cannot imagine any Hollywood ‘star’ in such a role these days. Well, to be fair, there’s not many so-called stars in Hollywood these days with the lived-in looks of Hackman, most of them are far too pretty-looking and ‘perfect’. Hollywood these days seems more pre-occupied with fantasy and the ‘ideal’ than the gritty realities of films like this.  Co-star Roy Scheider is as capable and wonderful as he ever was, but this is Hackman’s film, no question.

Scheider of course had the success of Jaws still ahead of him- what a thought that is, what a decade the 1970s was! Indeed, when one considers that Hackman’s subsequent films that decade would include The Poseidon Adventure, The Conversation and Superman: The Movie.. wow, you gotta love those 1970s. It all started with The French Connection though, and its a riveting performance that shines brightly still. Hell of a film.