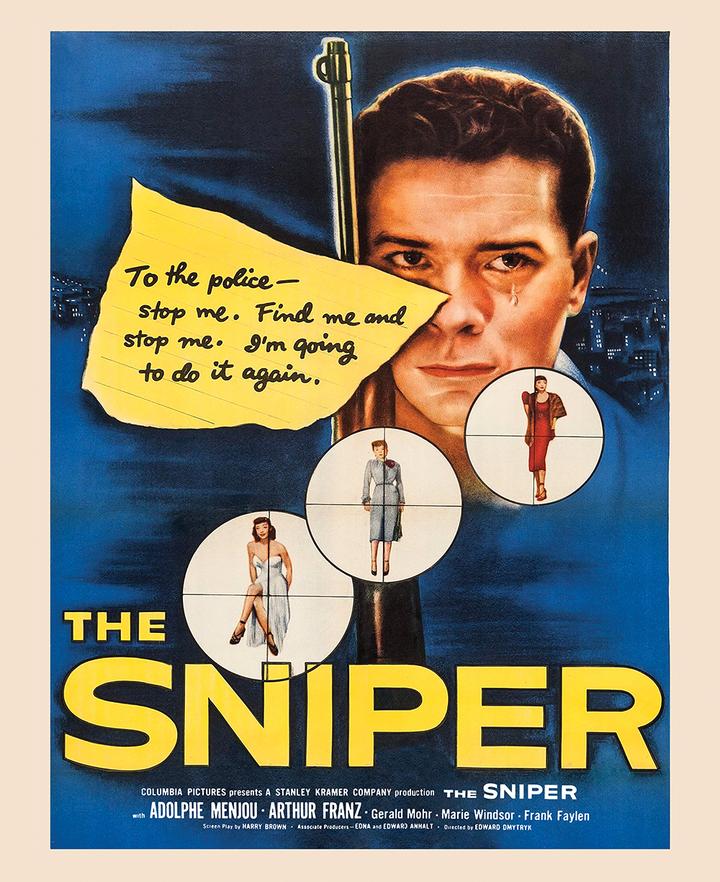 I was surprised to discover just how much of a precursor Edward Dmytryk’s serial-killer-with-a-rifle flick is to Don Siegel’s Dirty Harry, the latter film’s Scorpio killer even terrorising the same city (poor San Francisco) with both films featuring sequences of the rooftops as a place of danger and ‘death from above’. Most surprising of all, in some ways, is how The Sniper is intellectually perhaps more sophisticated than the 1971 film- the villain of the 1952 noir is handsome, all-American guy Eddie Miller (Arthur Franz) who knows he’s mentally disturbed and keeps trying to stop what he’s doing, actually trying get caught and returned to hospital. Andrew Robinson’s Scorpio killer looks shady, acts crazy and is just plain evil, enjoying what he’s doing- a frankly one-dimensional villain, fitting the Siegel film’s simplistic black and white narrative. Film noir of course, for all it being actually filmed in black and white, is thankfully often more nuanced than might be expected, and The Sniper is indeed more complex than the later exploitation flick.

Its impossible to over-estimate the impact this film likely had back in 1952, considering its subject matter and quite graphic murders. Its rather progressive social commentary, calling for better mental health services and understanding of those who are a possible danger to society, curiously echoes sentiments delivered in The Dark Past, another film in this Indicator set. What likely made The Sniper so radical at the time is how it gets us ‘into’ the mind of the conflicted Eddie, marking him a victim himself – not excusing his actions but possibly explaining them. The way the film portrays him repeatedly as an ‘outsider’, as someone who doesn’t fit in or really understands how to be accepted in society, also reminded me greatly of Taxi Driver. No-one has any compassion for Eddie, not even children in the street who turn upon him when he attempts to join in their ball game, and even a customer who is friendly towards him casts him away as soon as her boyfriend turns up (this rejection actually triggering him to enact his first murder).

The one thing in this film that didn’t ring true -and actually annoyed the hell out of me- was Gerald Mohr as detective Joe Ferri, younger sidekick of elder-statesman/case leader Lt. Frank Kraft (Adolphe Menjou). Mohr seems to think he’s in some boys-own adventure film or that he’s somehow the actual lead hero- he grins like an idiot throughout and poses all the time (he holds his gun like its a toy). I suppose he reckoned he was a matinee heartthrob, and can imagine him asking his agent “do I look good?” in every scene and its a horrible performance that grates throughout, he’s just terrible and watching him run, gun in hand, towards Eddie’s building near the films climax was cringe-inducing (“hey, look ma, its me!” kind of thing). One of those cases where an acting performance is clearly NOT trying to serve the movie, I’ve discovered that Mohr features in the noir classic Gilda that I bought on disc a few weeks back that I shall be watching for the first time soon. A cautionary discovery!

Arthur Franz is thankfully very good as the conflicted Eddie. He’s quite sympathetic in a role that could usually be a one-note crazy bastard (again, see Andrew Robinson’s Scorpio killer) and he succeeds in earning our empathy even after killing women in cold blood. I thought it was clever, possibly even daring, casting a handsome actor who looks like your typical Hollywood ‘wholesome good-guy’ as such a dangerous unhinged individual. It certainly gets our attention and curiosity regards what makes him tick and the source of his mad rages- not the usual consideration when watching a Hollywood villain.