You know how in detective films and tv shows, they pin up clues on a wall, photos or other items, and use different-coloured pieces of string to connect them together? Like huge complex diagrams or charts, somehow the connections revealed by those webs of string solve the case. But the connections are the thing.

Sometimes it seems a little like that with films. You can watch films at random and suddenly be struck by odd coincidences or connections. As if hidden in the randomness there is some sort of pattern. Maybe there is a meaning to it.

Or maybe not. Why do I mention this?  Well, it was a little curious that only the other week on a whim triggered by TCM’s scheduling that I rewatched The Naked Jungle (1954) and now by sheer chance I was watching William Wyler’s 1951 film noir Detective Story, and it turns out they feature the same lead actress, Eleanor Parker. That coincidence of casting may not be a big deal, but its not the end of it though. The Naked Jungle starred Parker has a mail-order bride initially cast aside as “used goods” when her new husband learns of her previous marriage. In Detective Story, it turns out she again plays a wife with a rather shady past/secret. This time her husband, Det. Jim McLeod (Kirk Douglas) is unaware that her past is linked to a criminal he is chasing; “Dutchman” Karl Schneider, a New Jersey doctor suspected of being an abortionist linked to the deaths of young women. It transpires that she had an affair with a married man a few years before she met her McLeod and went to Schneider for an abortion. The revelation threatens to shatter both their marriage and McLeod’s obsessive worldview/attitude to policing and crime.

Poor Eleanor. Was she being typecast as reputable-looking women with hidden secrets?

Detective Story is a great little film- I say ‘little’ as it’s based on a stage-play and hence has few locations and  pretty much functions as a one-set acting ensemble akin to 12 Angry Men. Its a great, dramatic character piece where action is secondary to the plot and character arcs. Rather the exact opposite of most films that are made today. In that respect, the film is a curio. There are no action scenes, no stunts, no visual effects, just a story, told with characters in a drama set over the course of one evening.

Based on a Broadway play it naturally has the feel of something being performed on a stage. There is a sort of unreality about it that, with its film noir sensibilities, gives the film a curious atmosphere of a police procedural via the Twilight Zone. KIrk Douglas is as intense as ever- perhaps too intense, but that is perhaps because his character is as much damaged goods as anyone else, his character crumbling as he rushes headlong towards his inevitable destruction.

Much like The Naked Jungle, the sexual undertones and sensibilities of the film betray its age and era. The McLeods are happily married, albeit struggling to conceive a baby, but this apparent idyl is on shaky foundations- when his wife admits to having had an abortion in her past, the social stigma and its impact on the detective’s black and white worldview of absolutes cannot cope. Suddenly she is a tramp, as if the knowledge she wasn’t a virgin on their wedding night invalidates the whole marriage- she was used goods, just as Charlton Heston’s character rages in The Naked Jungle. In that film, it is at least inferred that he too is a virgin (as unintentionally funny the idea of Heston playing a virgin might seem to viewers now). Detective Story rather skirts this, as McLeod is clearly a man of the world and hardly subject to the same restrictions/moral limitations as women are in that world. However, the inferred betrayal, and its impact, inevitably lead to Mcleod’s end. Right and wrong, good and evil, are absolutes for McLeod; all criminals must pay for their crimes, regardless of their circumstances- it is something he ‘learned’ from his own terrible father and how he treated McLeods mother. 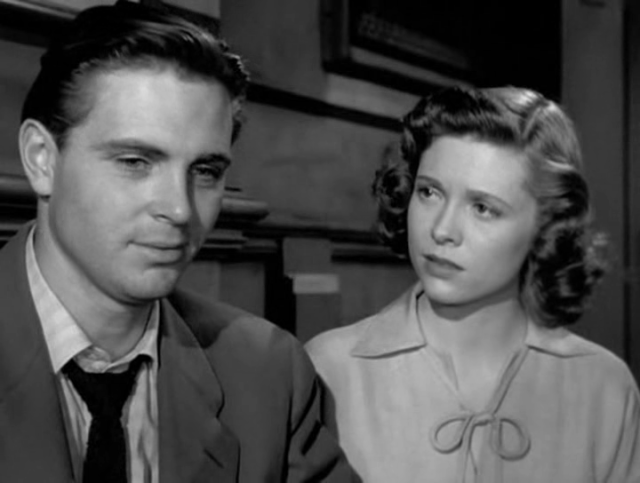 If McLeod ever ‘sees the light’ it is only in the face of his own destruction. His wife has left him, knowing he cannot shake his moral beliefs or give her a second chance. But seeing the love of a young woman for a young first-time offender that he was previously adamant had to be prosecuted, McLeod tells his colleagues to the criminal go. He gives the man the second chance he refused his own wife, and as he draws his last breath the two lovers flee the Precinct… love conquers all after all, for a precious few at least.