Just a short post to note my sadness at the recent news of the passing of Spanish artist Carlos Ezquerra, whose remarkable work was a big part of my teenage years reading the British comic 2000AD.  Most famous for being the co-creator (with John Wagner) of Judge Dredd, Carlos did so much other great stuff too- notably Strontium Dog for sister comic Starlord and strips based on The Stainless Steel Rat books, as well as war strips for weekly comic Battle.

For myself, I’ll just say this- one my fondest memories from my youth is of reading the Judge Dredd epic The Apocalypse War week by week in 2000AD and sharing the weekly twists and turns with my mate Andy. A little bit like water-cooler television for us, we’d  each week marvel at the epic events and discuss what we’d read like people do over stuff like Game of Thrones now. Incredibly fast, Ezquerra somehow managed to single-handedly provide the art for an entire saga that stretched over six months. Several years ago I bought the Apocalypse saga collected in a handsome IDW hardback edition and re-reading it was such a great experience, it proved easily as good as I remembered it. Ezquerra’s storytelling was cinematic and peerless. 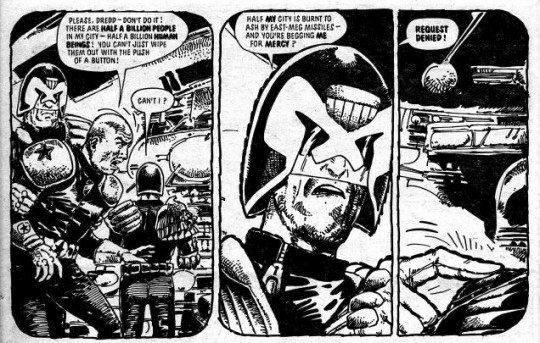 Carlos was some kind of genius and as others have wisely noted in comments over the past few days, easily deserves to be considered one of the very greats of comicbook artists, like Kirby and Eisner before him. Yeah, another one gone.