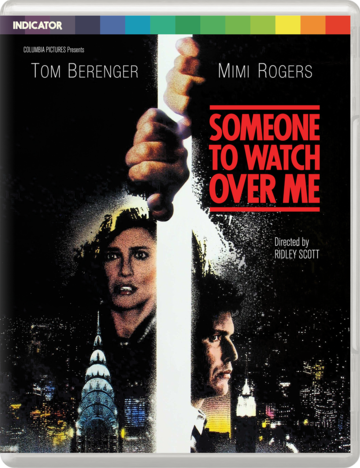 Last night I watched Someone To Watch Over Me and The Front Page, a double-bill like in the old days when I used to have plenty of time for such things. There was no calculated decision regards which two films would make a good double-bill (i.e. Jaws and Alien = two films about Killing Machines!) – this was one of those accidental things, simply two of my recent purchases. Someone To Watch Over Me on Blu-Ray came in a box alongside with Columbia Noir #3 from Indicator a few days ago (yes folks more noir reviews coming soon-ish), and The Front Page on Blu-ray came from Amazon Germany (‘ExtraBlatt“). I’d noticed the latter had come back in stock at last, and as its one of the few Jack Lemmon films available on disc that I don’t own (and a Billy Wilder film at that) I thought it was past time I bought it, especially as it was just about £7.00. Now that I think I’ve pretty much caught up with these Lemmon/Wilder films available only in foreign territories (The Fortune Cookie last December and Avanti! sometime before that) no doubt Arrow or Eureka! will announce UK releases shortly.

I remember watching Someone To Watch Over Me back in 1987 when it came out at the cinema, and later on VHS- yeah the ‘old days’ indeed. At the time it was a very odd film for Ridley Scott, coming after Alien, Blade Runner and Legend and at a time when Scott was claiming he wanted to be the ‘John Ford of genre films’ or something of that nature. It was obvious even at the time that after the financial and critical drubbing of both Blade Runner and Legend, Scott was in the movie industry sin-bin and was having to find lower-budget, less-ambitious film projects in order to get a gig. Its funny now, with the hindsight of his later filmography to put things in better perspective, how at the time Someone To Watch Over Me seemed to me such a betrayal of Scott’s promise and ability. Its one of his weakest films, as low as any of his films are regards ambition or originality, and was clearly so at the time. Sure, it looked pretty, but it was more pretty vacuous, and even though Scott would later make worse films these days Someone To Watch Over Me is pretty low in the list of his movies that people even remember.

I hadn’t seen the film myself in maybe twenty years, so I was pretty shocked when watching it how much came back to me, even being able to predict what characters were about to say (I could recall some dialogue verbatim) and elements in the plot and shots etc. What can I say, I must have had a better knack of committing films to memory back then. Its unfortunately one of those films that doesn’t really improve with age, so there’s no re-discovery of a lost classic here. Indeed, I had one of those moments when watching this last night that I wondered if I would ever watch the film again, which is a bit disconcerting when I’ve just plumped down money for a new Blu-ray edition, but being an Indicator release it does come with a few special features, including a new audio commentary (by filmmaker and film historian Jim Hemphill which will give me reason for at least one more watch). Anyway, I’m certain I’ll watch it again someday regardless of commentary track; its a Ridley Scott film, isn’t it? There’s a certain fun in spotting Blade Runner-lite shots in the location shooting and the cast is pretty great; I never understood why Tom Berenger didn’t have more success (although I guess maybe flops like this one did more harm than good) and Lorraine Bracco is quite terrific. Mimi Rogers is great too; its not a bad film, but its Ridley Scott, you know? Its my own personal baggage from when the film originally came out, I just can’t shake off the feeling, even after all these years, of comparing lightweight stuff like this to Alien and Blade Runner.

But whenever I do re-watch this film, it always reminds me of those days when Blade Runner was such a flop and critical failure, before it was ‘reappraised’; these days people forget how badly that film fared and how disastrous Legend was with its heavily-delayed American release and soundtrack change and how it was so badly edited. I so clearly recall the years when Blade Runner was the very definition of ‘cult film’.

Here’s another thing: when I first watched this film in 1987, it was way before Babylon 5. Andreas Katsulas, having to make do with a badly underwritten part here as bad guy Joey Venza, would be magnificent under lots of make-up as Ambassador G’Kar in Babylon 5, usurping expectations over a number of seasons turning a villain into a deeply nuanced hero. Its difficult to watch this film knowing, now, just how good an actor Katsulas was and how he deserved a better script here. Venza is terribly one-dimensional; there’s no attempt to add any depth or substance to him: he’s simply background noise, a plot mechanism to get Tom Berenger and Mimi Rogers together. Its not that Someone To Watch Over Me is lazy film-making… or maybe it is, maybe its indication that Scott was just working as director for hire, here, because usually however simple a Ridley Scott film can be, usually there’s some nuance and depth, some sleight of darkness in his better films.

Films are of their times and when examined on that criteria alone, something like Someone To Watch Over Me makes sense when considering Scott’s film career-path. I wonder what might have been had audiences been ready for Blade Runner and had Legend been given a decent chance (you can see Blade Runner‘s failure all over Scott’s second-guessing regards Legend, even in its European cut). Would Scott really have turned towards more low-key, real-world character drama, or would he have been off making another sci-fi or historical epic? I remember James Cameron commenting (I believe it was after T2) that he was weary of big blockbuster film-making and wanted to turn to a smaller, more intimate film and he never did (unless Titanic was his twisted idea of ‘intimate’). Likewise George Lucas always went on about making smaller, more experimental films after Star Wars, and he never did (well I guess one could describe Howard the Duck as an experiment). But Ridley Scott did, even if it wasn’t actually wholly by choice or totally successful. His road back to genre films was a long one and itself not wholly successful (Prometheus, Alien: Covenant)- it was too long a road, perhaps, over too many years. Maybe I should have guessed that back in 1987 when I watched Someone To Watch Over Me with such puzzled frustration- I can make my peace with the film now; its not a bad film, really, but it does have whiff of DTV/ ‘cable movie of the week’ about it, and for a Ridley Scott film that is… well, that’s about as bad as it gets.

One thought on “If you ever watch this again, you never saw it before”