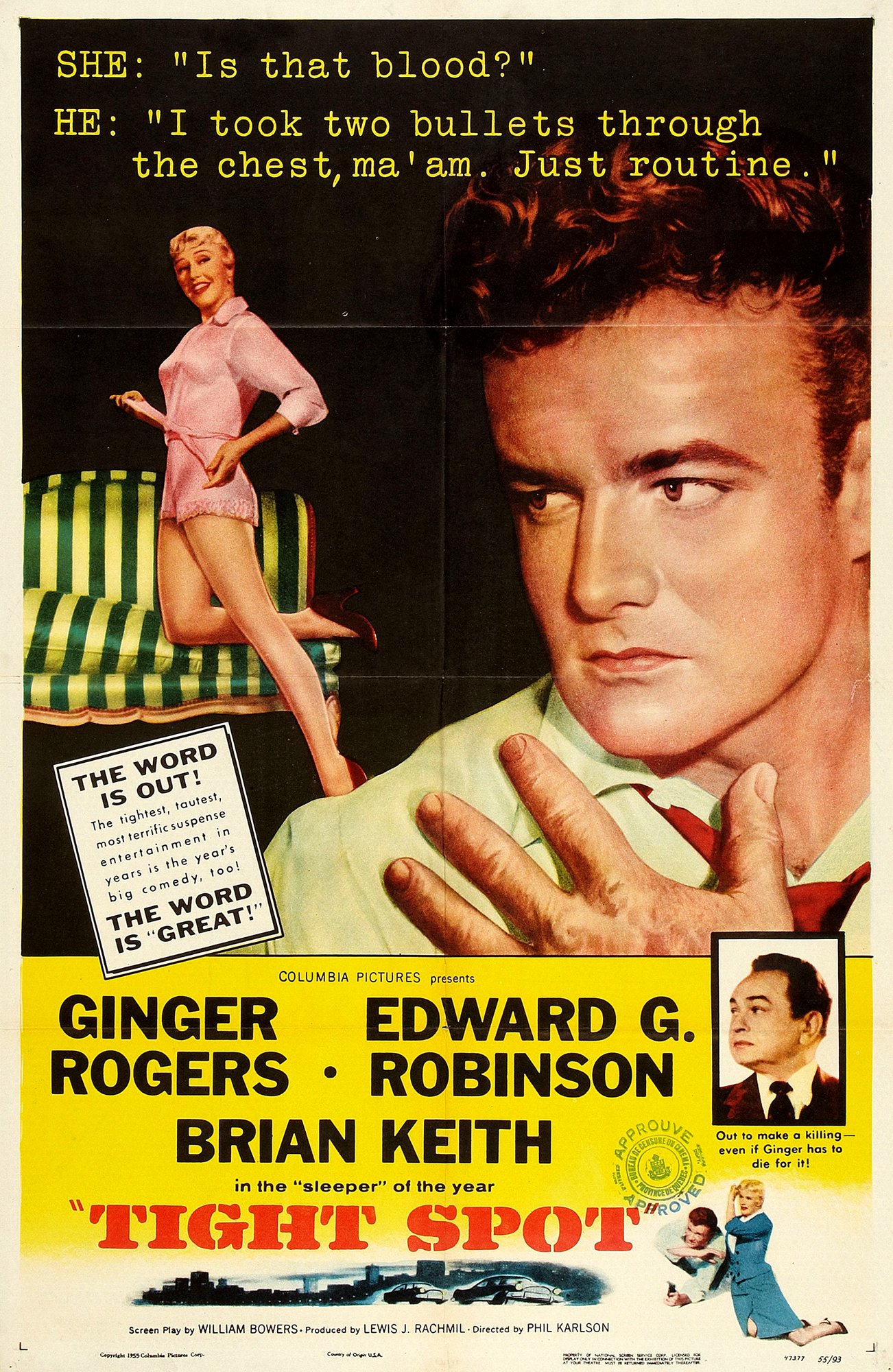 This was such a strange film, carrying an unlikely tension throughout, between comedy and noir- and I have the suspicion that it was possibly even unintentional, that the film was somehow out of control. But then again, if it was intended to be a gritty, tense noir about the long reach of the mob to intimidate and silence witnesses via corrupt administration and police, then how come director Phil Karlson didn’t pull up star Ginger Rogers on the first day of shooting and inquire “Ginger honey, what the hell are you doing?”

Because to be clear, Ginger Rogers, playing prison inmate Sherry Conley and last-hope witness for a desperate  prosecution of a mobster who has hitherto escaped the law, is all wrong for this picture. I suspect the role was just too much of a stretch for her, resulting in her streetwise, bad-luck criminal being too loud, too over the top, bordering on farce and almost breaking the fourth wall as she delivers sharp one-liners directly at the audience. Its specially jarring as the rest of the cast are so restrained and subtle – the great Edward G Robinson is marvellous as the tough, dedicated prosecuting attorney Lloyd Hallett and Brian Keith surprisingly endearing as police detective/minder Vince Stalker. Indeed, the film is almost stolen from all of them by Katherine Anderson’s Mrs Willoughby, a prison warden who is Conley’s escort when she is removed from prison, who steals scenes with her calmness. I’m really not at all familiar with Ginger Rogers but it seems patently clear that in a drama such as this she was out of her comfort zone  and perhaps as a result, she over-acts as if in a panic and attempts to steal every scene she’s in by just drawing attention to herself, practically crying out to the audience “look at me! Look at me!”

I cannot understand why she wasn’t asked to dial it down somewhat. Maybe you didn’t do that with stars of her calibre back then: at this point in his career Robinson was out of favour, almost backlisted by the House of Un-American Activities Committee and relegated to b-movies rather beneath him, and Brian Keith was on his way up after a career in television and hardly one to rock the boat. I can imagine Robinson walking of set shaking his head with a wry grimace that such was his lot and Keith wary of speaking out. The alternative of course is that it was all intentional, and Rogers’ broad strokes welcomed, and yet it doesn’t work-  I can only imagine jittery producers watching the Dailies with a rising panic.

Tight Spot is not a bad movie: based on a stage play and basically a one-set movie (mostly taking in place in a hotel room in which Hallett endeavours to convince Conley to testify against mobster Costain (Lorne Green)) the original source was obviously a character study and so ideal subject matter for a tense dramatic film (like 12 Angry Men maybe) but it keeps on swerving into romantic comedy. Rogers chews up scenery and rattles off witty one-liners like bullets from a machine gun, and scenes are occasionally broken up rather jarringly by sequences from a television broadcast of a charity marathon with a singing cowboy that is given surprising screen time. Its quite a bizarre experience that’s difficult to really explain. The film is partly saved by a surprise twist that I won’t share here (even if the film is over sixty years old) and I feel the need to point out that Lorne Green makes a memorable bad guy even if he has little more than two scenes.  Indeed its the performances from the rest of the cast that saves the picture almost in spite of Rogers; I much preferred Brian Keith here over his role in 5 Against the House and the film proved a very welcome reminder of just how good Edward G Robinson was. It has some tense moments (mostly a gritty beginning and finale, leaving the film feeling like a madcap comedy bookended by noir) and really is very enjoyable once one can dial-out or ignore Rogers’ ill-judged performance. Or maybe I’m missing something unique to 1955.