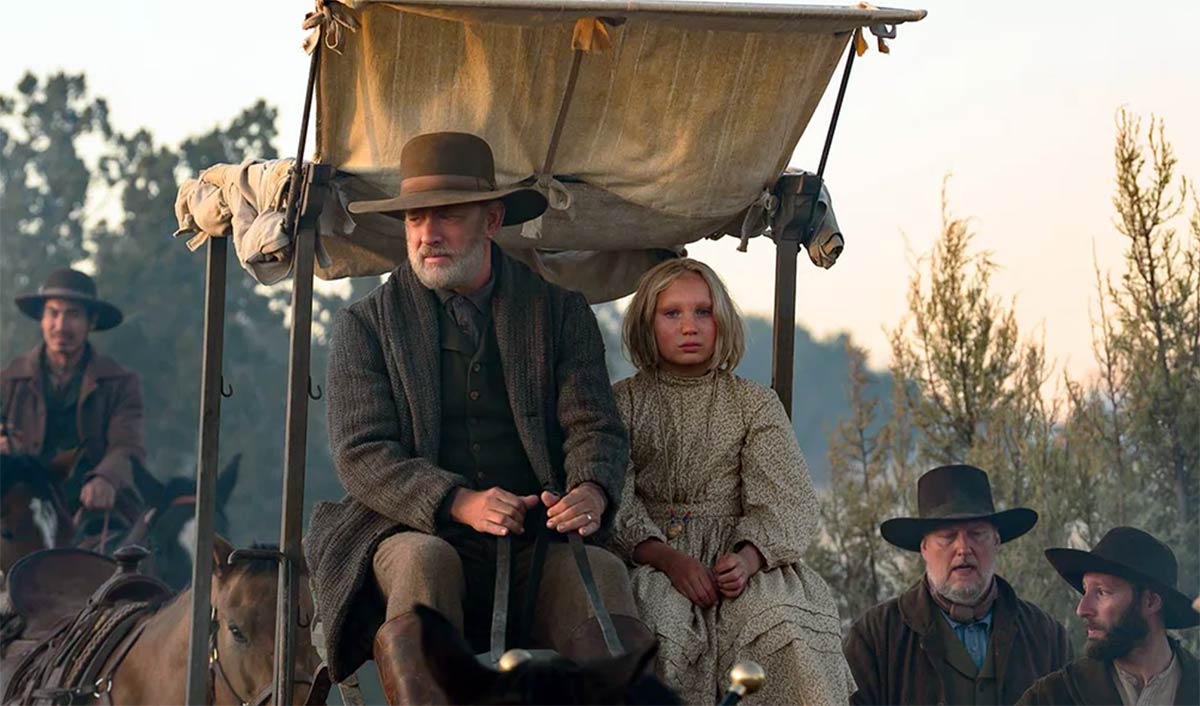 There is an argument here regards expectations, and the talent behind a project skewing them- initially seeing the names Paul Greengrass, Tom Hanks and cinematographer Dariusz Wolski, I expected something new, some fresh angle on that hoary old genre of the Western. New of the World, it turns out, is more of an affectionate nod to the Westerns of old – which is no bad thing, certainly, but it did take me a little while to re-adjust to. There is one sequence in the films episodic narrative in which three bad guys threaten our hero and the child that is his ward and it feels like a descent into cliché, the lead thug and his silent companions coming out of nowhere and so obviously up to no good its like they have flags on their backs. Its very black and white, and lacking any nuance at all, really, and possibly that sequence is my real issue with what is otherwise a pleasant and entertaining film.

One has the feeling that Tom Hanks could play these roles in his sleep, and that he has to make very little effort these days other than just turn up on-set, which may well be doing him a disservice. He just seems to fit these kinds of roles like a glove, as if the character is written specifically for him alone, which is patently not the case here as the film is based upon a book, but that sense of familiarity and ‘coasting’ remains. I suppose its simply that he just so very good at playing parts such as this, some kind of blurring of screen personas settled over decades of roles and films, in which real-life nice guy Hanks and on-screen good-guy Hanks are one and the same. Here he plays Civil War veteran Captain Jefferson Kyle Kidd, who wanders the Western landscapes travelling from town to town reading passages from newspapers to townsfolk who are too poor and busy to read or unable to read the news of the bigger world that lies beyond their immediate daily concerns and small worlds. A chance encounter during one of his journeys leaves him taking a 10-year-old girl, Johanna (Helena Zengel), across Texas to her aunt and uncle. Johanna had been ‘rescued’ from a Kiowa tribe that had murdered her parents and family some six years prior, and is caught between two worlds, having forgotten her original German-settler heritage and adopted the traditions and language of the native-American tribe that had ‘adopted’ her. Now having neither, she is lost and confused, something that is mirrored in Kidd’s own sense of nomadic disenfranchisement and haunted past; references to his old life pre-Civil War and photograph of a wife that he looks at longingly. Both characters are ungrounded by events in their past and through each other have to find their new places in the world.

Young German actress Zengel is absolutely wonderful, and its her character and performance which largely lifts the film to a higher level. It may well be that the sense of Hanks in his ‘comfort-zone’ is largely because he is allowing Zengel to shine and steal the scenes they share- that he is in ‘supporting actor’ mode here contrary to the billing of the film. This is clearly a creative decision deliberately shared by Hanks and Greengrass and its exactly what saves the film and lends it a definite emotional weight that pays off at the conclusion (which is surely inevitable from the start of the film).

New of the World is possibly one of those films that won’t shake the foundations of the cinematic world by offering anything particularly new but may over time become something of a… not ‘classic’ by any means, but its an effective film, albeit it suffers from having such a largely familiar narrative. I can’t say I was disappointed by the film – its clearly exactly what it is intended to be and not every film can stretch the boundaries of its chosen genre. That being said, while it could actually become tiresome if every film DID shake things up, its a little underwhelming to watch a film that feels quite this comfortable throughout, as if it does not feel the need to really stretch itself at all.  Is it cynical of me to note the time of year this film has been released (I think it got a very limited theatrical release in the States in December), and it being such a non-controversial film so very close to Awards season?