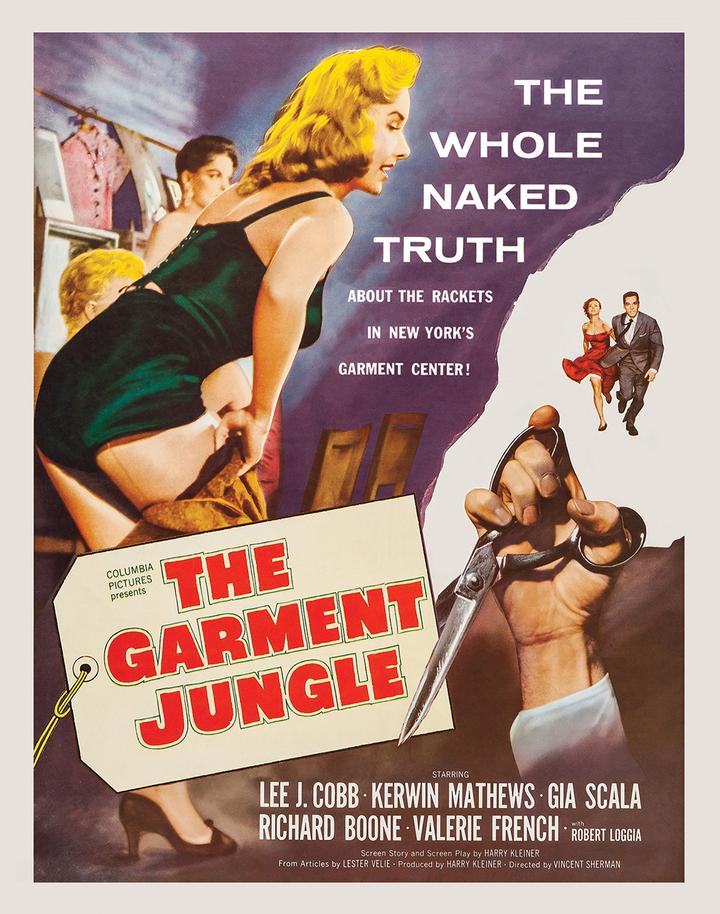 Its possibly true as far as actors go: you’re only as good as the movie you’re in. Kerwin Mathews, for instance, featured in the previous film in this Indicator Columbia Noir #1 boxset, 5 Against the House, in which he didn’t exactly set the screen on fire, but here in this Vincent Sherman/Robert Aldrich-directed crime/mob racket thriller he really impresses. I thought Mathews was really very good in this, measuring up well against the likes of Lee J.Cobb and a shockingly young Robert Loggia, both of whom are frankly excellent. The more that I think about it, it may be a case of very good casting- Mathews plays fresh-faced Alan Mitchell, son of Walter Mitchell, the owner of  successful garment company Roxton Fashions, who returns to New York after some several years away. Alan is a fish out of water, an outsider looking in, mirroring the audiences point of view as he (and we) learn about the seedy machinations going on in the industry. Alan is a rather thankless character, blank-faced and reactive to everything, so maybe the part worked to his strengths and suited Mathews to a tee. Maybe I’ll adjust my opening line: you’re only as good as the film you are in and the actors you are with.

So anyway, back to that plot. When Alan arrives it is just after a terrible accident in which his fathers business partner has been killed. While Walter is bitterly saddened by his partners death, he is so distracted by the menace of unions infiltrating his shop that he doesn’t realise that the accident was no accident at all. Walter has for years been paying protection to ruthless mobster Artie Ravidge (Richard Boone) to ensure the unions are kept out of his business. How much of a blind eye he has been keeping regards Ravidge’s methods isn’t at all clear and there is a really nice grey line that suggests Walter accepts a necessary evil and knows more than he lets on, perhaps even to himself. Of course as the film progresses Walter has to come to terms with his own responsibility for Ravidge’s actions, especially when confronted by Alan, who has befriended a union activist, Tulio Renata (Loggia) who is eventually cornered and killed by the mobsters, bringing Alan and Walter to a bitter father/son confrontation.

The Garment Jungle is a very, very good film. Films can surprise, and when they do it can prove so very welcome. Back when I saw the list of films in this set, and knowing nothing of any of them, I reckoned that The Garment Jungle would likely be the weakest of the bunch- I think it was the title and the poster art which had me dismissing it. How wrong I was. This is a film with a superb cast, a genuinely interesting story with real surprises and plenty of opportunity for that cast to display some great performances. Its much more nuanced and complex than the exploitation film that poster suggested it was.

Regards the actors in this film, I can’t think of a bad turn. Cobb is excellent; tough, pressured, worried about losing control of his life’s work building his business into a success and desperate enough to make deals with someone he shouldn’t have, and then having to face the consequences. Cobb is thoroughly convincing and I appreciated the dubiety regards how innocent he is. Robert Loggia of course is as great as ever, a very fine and intense actor, it was something of a shock to see him as young as he is here and clearly displaying the strengths of that intensity at such a young age.

I was quite struck by the leading lady/more-than-slightly-uncomfortable romantic interest in this film, the beautiful Gia Scala playing Theresa Renata. Gia has an intoxicating, quite arresting presence in this, but its not at all a sultry, femme fatale kind of role that might be expected in a noir – I have to wonder what she might have done in a role like that. Here she plays Loggia’s young wife who seems to quickly get the uninvited attention of Alan – there is a certain chemistry between them from the moment they meet that works very well, but it also feels a little uncomfortable that Alan is so attracted to her when she’s married, and the murder of her husband just seems to give Alan even more opportunity to pursue her (this all in spite of her having a baby, I should add). It doesn’t necessarily show Alan in a very gallant light, but like his father, he seems rather in denial regards his methods and motives. How very noir, when even the nominal ‘romance’ of a film has such questionable undercurrents.

I looked up Gia to see what else she had been in, she so impressed me (its a really strong part considering it could have been just a one-dimensional wronged widow/endangered mother) but was horrified to learn that she died at just 38 years old, in 1972. Her career never really took off, film roles drying up to be replaced with television work through the 1960s, a blighted personal life and alcohol problems: it would seem she never recovered from the death of her mother in 1957. As I have noted before, I can often find it so difficult to reconcile the perfection seen on screen with the frailties and human weaknesses of real life. I think it makes such great performances just more incandescent, somehow, and arresting. Maybe its just the sense of promise unrealised.

Its such a shame- on the strength of her role in The Garment Jungle, I have to wonder what she might have achieved had circumstances been different or if she had been given the opportunity. I think she could have chewed up the screen gloriously as a traditional femme fatale role in some searing noir, but that was not to be. Some maintain doubts regards the manner of her death- ruled by the authorities as an accidental overdose of drink and drugs, some thought it a suicide while her sister believed it may even have been murder. Shades of the death of Marilyn Monroe (Gia was discovered nude sprawled on her bed with bruises on her body and blood on her pillow)? It seems to me that Gia’s fate is a grim footnote to The Garment Jungle and another reminder of the dark underbelly of Hollywood- indeed, how Hollywood is so very noir.