My copy of the third season of Westworld on 4K UHD arrived today- and its never been clearer how physical product of films and television shows on disc is becoming less and less of an interest to studios and distributors. Remember the glory days of any HBO series on disc? The ill-fated series Rome on Blu-ray actually came in ornate wooden boxes (so fancy they still take a pride of place on my shelf all these years later), the first few series of Game of Thrones came in fancy sets embellished with clear plastic slips with printed sections and embossed cases… over the years with each season those GOT sets became less fancy, but nowhere is the decline of disc packaging more obvious than with Westworld. 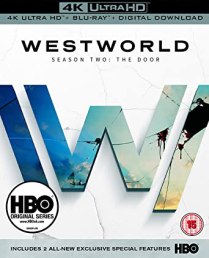 The first season came in a fancy tin. The second season in a less-impressive, but still fairly quality, embossed slipcase with a sturdy digipack. The third season? A standard 4K Amaray case inside a very slightly laminated, suspiciously thin cardboard slipcase. Over in the States, fans are moaning about the packaging but at least their case seems to be lenticular and embossed, indicating some limited effort which is more than our cheapo edition (well, I say ‘cheapo’ but I note the price of the set hasn’t been reduced compared to earlier seasons when they came out).

There was a time when physical product was something of a premium product, certainly compared to digital downloads, but I’m afraid some kind of parity is coming, although again I note that parity does not extend to the price. Oh well, sign of the times, I suppose, but all the same, poor show HBO/Warner.

Mind, I suppose I should just be thankful I get the series on a physical 4K set at all (we never got a 4K Watchmen series or 4K Chernobyl), so hey, I’m not going to complain too hard, for fear that season four when it eventually comes in a few years turns out to be digital-only, but I’ll just close my eyes a moment and remember the good old days of 2010 – 2015. Some may cast their memories further back than that, there have been some lovely imaginative examples of disc packaging over the years, especially during the DVD glory days, but I guess those days are long gone now. You just have to look at my three seasons of Westworld in my shelf. They actually look like they come from three entirely different tv shows.

5 thoughts on “The future of Disc packaging is nerfed”