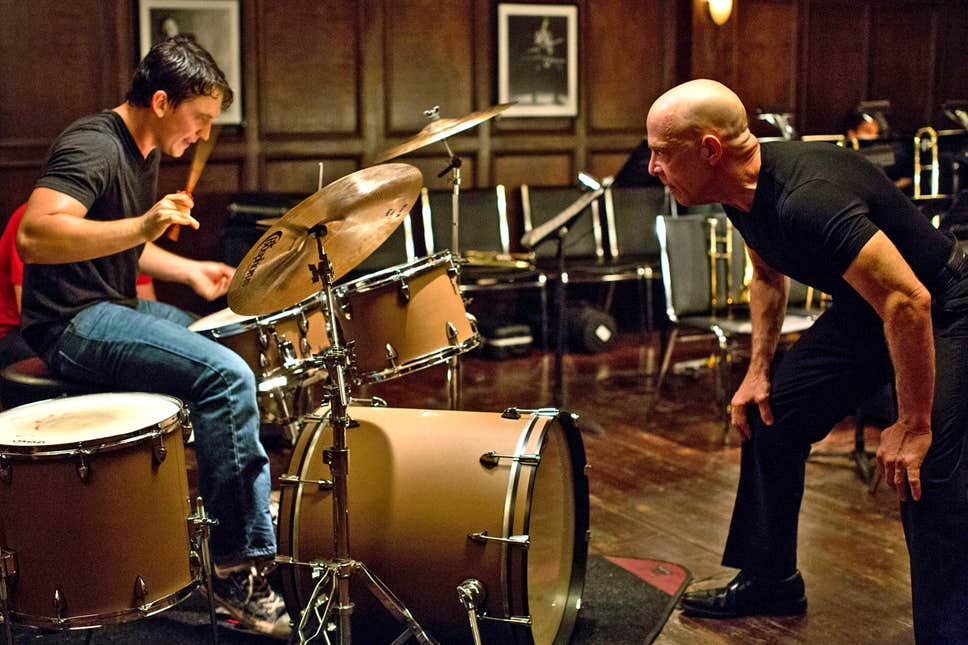 I thought this film was terrifying. Seriously, I shrug off and laugh in the face of the grisliest of horror films (to be fair, they are often all just dafter the gorier they get) but this film about a young jazz-drummer wannabe being terrorised and bullied by his music teacher was absolutely horrifying. I still get uneasy chills thinking back to J K Simmons’ monstrous Terence Fletcher. His performance really got under my skin, so much so that thinking back on the film feels like a panic attack in itself. I can’t explain it, I feel nervous just writing this down. Scariest. Film. Ever. Its like one of those anxiety dreams that just intensifies as it progresses, my dream-self increasingly losing control as it descends into nightmare. While the film does unfortunately descend into exploitation territory at moments, possibly inevitably so really, considering what it depicts, nonetheless it is such a shocking exercise in relentless tension.

Disturbingly, when Fletcher confides his reasoning to our unravelling hero Andrew (Miles Teller) “There are no two words in the English language more harmful than ‘good job’” he grunts, one almost has to applaud him. He believes that praise and nurture are ultimately defeating, only from great suffering can one create a genius and Great Art. Those that fail (and he has destroyed the lives of students before) were simply unworthy, easily forgotten, and although he not yet managed to discover and bully a student capable of legendary greatness, at least he can say he tried. The sheer bloody hubris of the monster: he has the simplicity and perfection of Giger’s Alien.

I’ve come to this film rather late, as the director Damien Chazelle went on to La La Land and First Man afterwards, films which I both enjoyed, and I’m not certain why it took me so long to get around to it-  Whiplash was clearly well-regarded, so its not like I was not curious. Maybe I knew deep down that it would get under my skin. Its a pretty amazing film, although I’m cautious regards stating that I really enjoyed it, it seemed such an ordeal in tension and I’m not sure I’ve quite recovered.