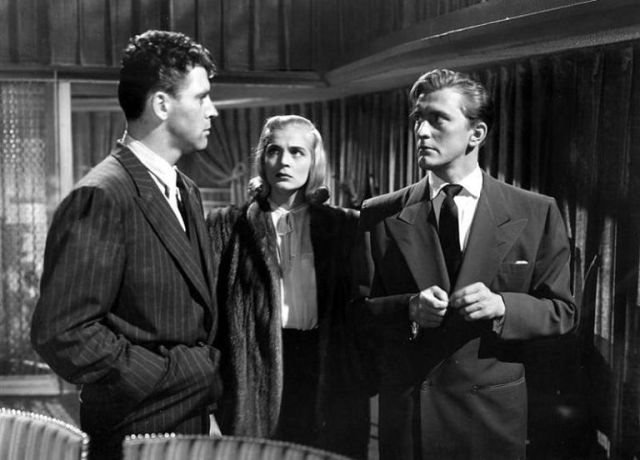 I was rather frustrated by this one- a film noir starring Burt Lancaster and Kirk Douglas (the first of several films they would appear in together) which also features Lisbeth Scott, who was so good in Dark City, which I saw a little while ago, albeit here in a fairly insipid role that’s unworthy of her. This film on paper promises so much but I don’t think it really worked. It gets bogged down with the frustrations of Frankie Madison (Lancaster) who has returned to his old haunts of New York after 14 years in prison to find he has been betrayed by his bootlegging partner Noll Turner (Douglas). Turner has no intention of honouring their deal to share in the proceeds of the criminal business they partnered in and that Madison did time for. The film seems to get so burdened with it -Madison takes an irritatingly long time for it to dawn upon him that he’s being ditched- and gets further weighed down by the unlikeliest of sudden romances when he seems to make an unlikely connection with Turner’s girl, Kay (Scott), who is getting strung along and ultimately betrayed, too, by Turner.

Yeah Turner’s quite a cad, yet another who seems to think he can go clean and turn his criminal empire into a legit business. Indeed the basic plot is very familiar, a trope of many crime/mobster flicks. In Sergio Leone’s Once Upon a Time in America Max looked after Noodles interests while he did time inside but ultimately when his own ambitions turn to going legit he realises he has to cut Noodles loose in similar fashion to how Turner wants to cut Madison out here. In America, Max’s betrayal of Noodles is complete -he even gets Noodles girl- but here Turner proves undone by his overconfidence and his woman scorned.

Douglas is very good as the lousy slime-ball Turner; the actor had a natural bent to such roles and to me his intensity always made him a more convincing villain, or flawed anti hero, than a traditional leading man (see his magnificent performance in Billy Wilder’s Ace in the Hole). I think much of this is just Douglas’ strong personality, his obvious drive and apparent ruthlessness in the real world as an ambitious Hollywood player that leaked into his performances (or maybe I’m reading too much into it).

In any case, its impressive that Douglas manages to hold his own against the man-mountain Lancaster, whose massive physique is quite intimidating when measured against everyone around him. While he snarls and clenches his fists its easy to accept him as a thuggish brute, the brawn against Turner’s brains who realises he’s been wronged and sees violence as his only recourse, but his performance often slips over towards the over-dramatic, lacking the subtlety of Douglas, and as I’ve noted, there seems little convincing about his sudden romance with Kay. It feels tacked-on.

Ultimately the film fails to be the sum of its parts, but maybe my real issue is just that over-familiarity of the plot, which is likely more to do with all the films made in the decades since than a fault in the film itself, which may have seemed quite original back in 1947. I suppose what seems predictable in 2020 can sometimes just be the benefit of  hindsight from all the films between: the cross we film fans just have to bear.