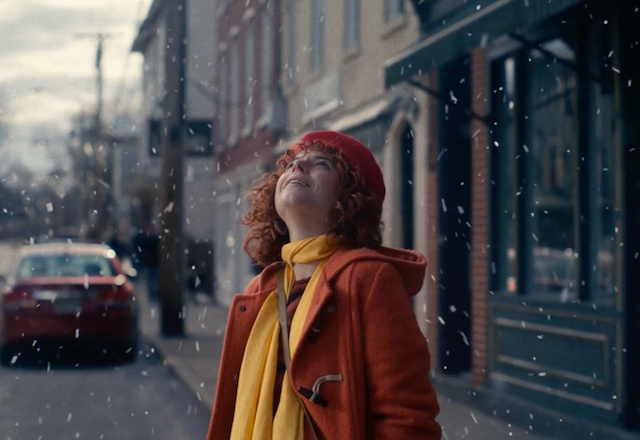 I thought this was exceptional, frankly. Naturally its difficult to really touch on why I think that, or even what this film is about, without treading into spoiler territory, but I’ll give it a go and, well, we’ll see how that goes.

Let’s see: the film opens with a young woman who may or not be Lucy (Jessie Buckley) ruminating in melancholy fashion about ‘ending things’ as the camera lingers over abandoned, silent rooms, and then she is picked up by her boyfriend Jake (Jesse Plemons) who is taking her to his parents house where she will meet them for the first time. The trip is out into a desolate wilderness as a snowfall intensifies, and Lucy seems distracted, her internal monologue a moody voice-over as bleak as the landscape they are driving through.

I must admit, as disorientating as the film is as it progresses -and believe me, it becomes INCREASINGLY disorientating and unsettling as it goes forwards- I may have been off-base from the start, because when listening to Lucy’s initial thoughts about ‘ending things’, I thought she was thinking about suicide rather than simply breaking up with Jake. I thought I was watching a suicide movie. It rather coloured how I ‘saw’ things and interpreted what was being said and what was done. The funny thing is, I was wrong about Lucy, and I wasn’t, because someone was indeed thinking of suicide, and nothing that we are seeing is what it seems. So there I was, becoming increasingly distracted by odd observations- a moment when Lucy’s lips are moving but we can’t hear what she is saying, and times when there seem to be continuity problems slipping into the picture, because Lucy’s sweater is changing colour…

Now, already at this point I can imagine your typical Netflix viewer heading for the remote to pick something else to watch, something easier, less demanding, less strange, something in which something happens. And I have to wonder just how many people watching this manage to get through to the end, because it really just gets odder as it goes. I just found it totally absorbing, mostly because of the magnificent performance by Jessie Buckley, who forms the sensitive heart of the film and its mystery that unfolds. The central mystery is whose monologue are we really listening to, whose thoughts and experiences are we witnessing? Clearly what we are seeing is not ‘real’, as time and place seem to be fluid, ephemeral- the only thing we are really able to hold onto is Lucy. But Lucy is a walking contradiction- her name seems to change, her occupation seems to change, her mood and personality seems to twist and turn and we, like her, seem to be caught in a strange spiral.

Jake’s parent’s farm appears suddenly in the snowy landscape, and once inside and Lucy meets them (wonderfully played by David Thewlis and Toni Collette), we suddenly notice that they are old one minute, younger the next, then even older, then even younger… the film becoming increasingly dreamlike, increasingly odd. We seem to have less and less to grasp hold of, to hold onto, in our attempts as viewers to discern sense and meaning. Everything seems to be unravelling.

Interspersed between the narrative of Lucy’s trip to meet Jake’s parents, we see apparently random moments in which an old school janitor cleans the High School’s corridors and rooms, unseen/ignored by the self-absorbed pupils. And references to the stage musical Oklahoma. And an imaginary Robert Zemeckis movie. And a talking animated pig.

Now, whether all of this is utter tosh or movingly profound depends on the viewer. Partly I suppose it all depends on how much effort the viewer is willing to expend on the film, to work things out, but on the other hand, I guess its just as valid to suggest that if you just sit back and let it wash over you it can be just as rewarding. Is it really even supposed to make any sense? I guess this is film as poetry, in which the images and scenes take the place of a poems words, but just as dependant on individual interpretation of meaning.  Its vague and obtuse but somehow obvious, too. It is, again, utter tosh or movingly profound. No, lets maybe change that, maybe its not either/or but both- its utter tosh and its movingly profound.

Me, I definitely lean towards the latter. I thought it was deeply moving- i’m thinking of ending things is a poem about loneliness, and age, and the value of one’s life, and of the possibility that moments and decisions, seemingly innocuous and unimportant in the actual moment, can have a huge effect on ones’ life, years later. Is it healthy to focus on one decision, one moment, and blame everything that followed on just that moment? There’s no way of knowing in the moment of any moments importance in ones life and its effect on what follows, so why torture oneself about it? But then again, isn’t torturing oneself about things just part of the human condition? A sense of right and wrong, of injustice and unfairness at a life seemingly wasted. Regrets can haunt one for a lifetime, and a lifetimes memories become blurred around them, until they are no longer reliable. Memories as unreliable narrator. Makes it hard to hold onto things.

The magic of life is that people can walk into your life and change it forever. It is also true that people can walk into your life and back out of it, never to be seen again, but their memory can linger deeper than that of someone you see every day.  i’m thinking of ending things is a beautiful film, I think, but a very sad one, too.  I think its sadness is what lingers in me, thinking back on it. Its overwhelmingly sad, really. Enigmatic and melancholic, tender and bitter. Beautifully shot and crafted with a wonderful cast. One of the Films of the Year, I suspect: and its a Netflix movie. Sometimes it seems our world can be as strange as the films that we watch.