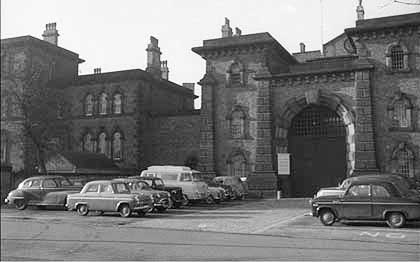 The fascination of British movies with jails and cons getting out into civilian life is quite a mystery to me, but here we go again, after Turn the Key Softly and The Price of Silence, with a shot of the exterior of a prison and an interior scene of a con being prepared for a return to the streets. Here its George Mallon (David Sumner) a fairly obnoxious and surly young man with a chip on his bitter shoulder. His bad mood and short temper aren’t helped when upon being freed he becomes a chief suspect for a series of murders of young women which occur at every full moon near the lodgings for ex-cons in which he lives.

Out of the Fog features a jazzy, typically crime-movie score from Ken Thorne, something I only mention because I recognised his name in the credits (he later scored the Superman II soundtrack when his friend John Williams dropped out following Richard Donner’s dismissal from that film). That, and the appearance of Michael Ripper, a frequent face in British films of the period, are possibly the only notable things I can raise about the film to be honest. Its a functional crime drama/morality play, and it maintains some minor tension at the end, but really the film suffers for its unlikable protagonist: a brave decision of the film-makers, I suppose, but it doesn’t work. If you don’t care for your lead, it leaves the drama rather lacking. The intention, I assume, was to maintain a “is he/isn’t he?” mystery at the end regards whether Mallon really is the culprit, and to maintain that they had to keep him looking suspicious. I’ll admit, my money was on Michael Ripper’s character, unlikely as that may sound, but it turned out to be someone else entirely. Maybe the film should score some points for steering me wrong.