Time-travel movies, eh? I’m always a sucker for this mini-genre of films but you’d think I’d know better: two time-travel movies in one night makes for a rather dizzying double-bill. First up, Safety Not Guaranteed, starring  Mark Duplass (of the great Paddleton) as Kenneth, a grocery worker whose classified ad looking for an assistant for time traveling into the past gets the attention of Jeff (Jake Johnson) a staff-writer of a magazine who sees the proposterous story as opportunity to look up an old high-school romance and takes two interns along for the scoop. This film is as light-hearted and quirky as its plot suggests, and while it perhaps doesn’t really work its nonetheless got a certain charm. Its success comes from the characters and performances- Mark Duplass is no surprise, but Jake Johnson certainly won me over as a brash sleazy-journo who doesn’t realise he’s having his own midlife crisis. As the film progresses, one begins to wonder if there might be some truth to Kenneth’s time-travelling claims and his fledgling relationship with intern Darius (Aubrey Plaza) has a certain chemistry that adds a romcom appeal. Throw in a coming-of-age subplot for the second intern, Arnau (Karan Soni) and a few suspicious FBI agents who are more Men in Beige than MIB and yeah, its rather fun in a daft, easy-going sort of way. 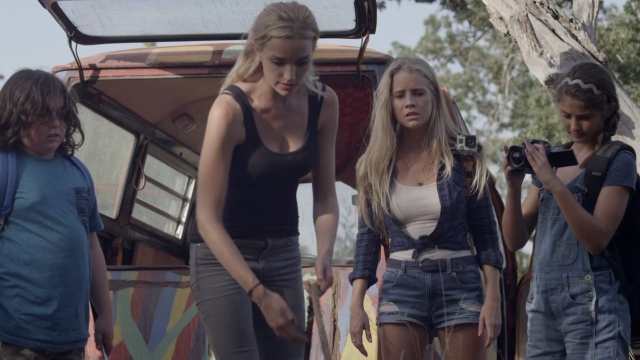 Less fun is the far more seriously-intentioned (ironically, considering its strictly b-movie/exploitation title) Timetrap, in which a bunch of teens investigating the disappearance of their professor get lost in caves that are, er, unstuck in time. Its one of those movies whose high-concept intentions really isn’t helped by its strictly tv-movie cast playing beautiful young things who are too thick to see the blindingly obvious. I have to wonder what the casting-sessions were like: Andrew Wilson as Professor Hopper is a poor-man’s Aaron Eckhart and Brianne Howey as Jackie is obviously a young Anne Hathaway sub. To be fair, maybe it wasn’t intended but it looked so obvious to me that I was continuously distracted by musings of how casting is such a lost art.

Timetrap is one of those… well, lets be charitable, lets refer to it as a film-  Timetrap is one of those films that has a premise that is initially intiguing but which becomes increasingly preposterous as it goes on, and unfortunately the film just takes itself increasingly seriously as it does so, stumbling into farce before the end. Whilst avoiding spoilers, I would just like to point out how much I hate films depicting ‘average joes’ being totally nonplussed by events that would have everybody losing their minds, and this thing has people being cured of, er, certain death and then flying off to far-future Mars at the end. Its actually quite frustrating, because some sequences are done quite well, its just that as it goes on, the whole film just seems to absolutely lose its shit. I remember stifling at titter at the caveman sequence in Altered States back in the day, but there’s moments in this that are like, that sequence times ten. By the time Timetrap ends, you’re just thankful its over, whereas with how Safety Not Guaranteed ends, you feel you’d quite like to know what happens to the characters next, which is, like, the best way to feel at the end of a movie, yes?

Safety Not Guaranteed is currently streaming on Netflix, and if you’re feeling brave, so is Timetrap.