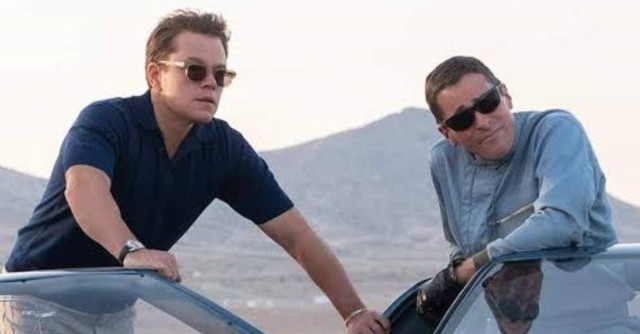 Our UK title for the film known more prosaically as Ford v Ferrari in many territories (something that sounds foreign no doubt proving a hard sell to American audiences), this film was great- brilliant even. A breath of fresh air, really; a rather old-fashioned kind of film- you know, great cast playing memorable characters, a tight script that alternates between drama and warmth and humour effortlessly, a story with a beginning, a middle and end, and all told with all the embellishments modern film-making can afford, such as fantastic sound design and flawless visual effects. The nostalgia of the film was as much from its Old School sensibilities as much as its richly recreated period setting. In all honesty, I was absolutely buzzing after watching this, that kind of high when you know you’ve watched a film that just works, just clicks in all the right places, a film I can imagine myself watching years from now.

Indeed, maybe it was the chemistry between Matt Damon and Christian Bale, and the male bonding of the characters they so memorably played, but I find myself comparing this film to The Shawshank Redemption. Its that good. Sure, it doesn’t break any rule-books or offer anything particularly new, but what it does do is look simple when its nothing of the sort, and moreover it knows what it is, and delivers. Like The Shawshank Redemption, its a film with a great story and great characters within it.

It can’t be any accident, for instance, that the film is currently scoring a critics score of 92% on Rotten Tomatoes, with an audience score of 98% – with those kids of numbers, you’d be forgiven for thinking this film had been an Oscar contender and a huge box-office success. Regards the latter, it was regrettably not so, grossing just $225 million worldwide on a $97 million budget, so likely not even breaking even. Another similarity to The Shawshank Redemption, then, and I suspect the film will gain more success at home from word of mouth in just the same way as Shawshank did At the Oscars it deservedly won two technical awards, but not any of the biggies. Shame that; I’m not going to suggest the film possibly really does enough to garner a Best Picture award, but then again, that award went to Parasite, a film which I’ve not seen yet but and okay, possibly a more deserving film from what I’ve heard, but…  a dark horse like the Old School Le Mans ’66/Ford v Ferrari would still have been great, sending a message to Hollywood that the Box-Office didn’t: more of these please.

But of course, in truth that Box-Office probably did send a message to Hollywood, just not the one I’d prefer- I really don’t know if the studios look much beyond those figures towards audience reception. Certainly the film seemed to have pretty much pleased most who’d seen it- the problem was just getting them in to see it. I won’t pretend that the film is perfect but I’ll easily forgive any of its slip-ups just for being what it is: a great, old-fashioned movie that deserved better at the cinemas. Oh well, there’s a long line of discs on my shelf that share that same description, and I’ll always return to them more often than many of the box-office blockbusters so quickly forgotten.

I’ll reserve final judgement until I’ve seen it a few times/digested it awhile, but really, this could be one of my favourite movies someday, sitting alongside Shawshank on the shelf.