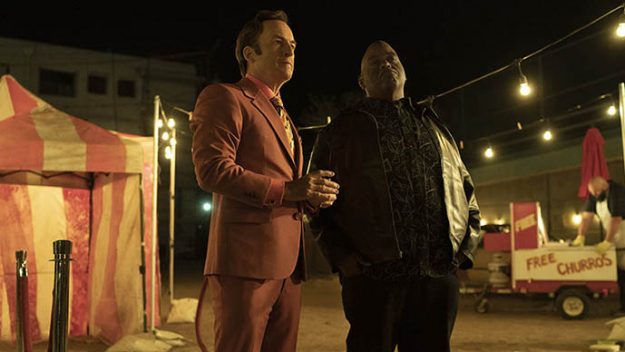 Netflix dropped season five of Better Call Saul yesterday and in a surprise move (well, it surprised me) it comprised of one episode only, with episode two promised for today (Tuesday) and the remainder of the ten-episode season dropping on a weekly basis. There was me girding my loins for a week-long binge of the entire season, putting off books/chores/films/other television shows to enable me to do it, and Netflix pulls this stunt. Weekly episodes? That’s so 1982.

But of course, its a good thing really. It means the show ‘lasts’ longer and stays relevant longer at work as we (well, the two of us watching it) discuss it while getting a coffee. So there’s progress. Lets all go back to the way television used to be, maybe that’s the future after all. Amazon are doing the same thing here in the UK with Star Trek: Picard, albeit that’s been mandated by CBS over in America where the show airs on a weekly basis on the CBS All Access service. I quite like this way of staggering a release like this as opposed to dumping the whole lot in one go. My head loved going through all of season four of The Expanse over one weekend, but my heart knows it would have been better released on a weekly schedule. My head thinks I’m an idiot sticking with Star Trek: Picard, but my heart says its easing the agony watching it weekly doses on Friday nights while winding down from a long day at work. So its win-win.