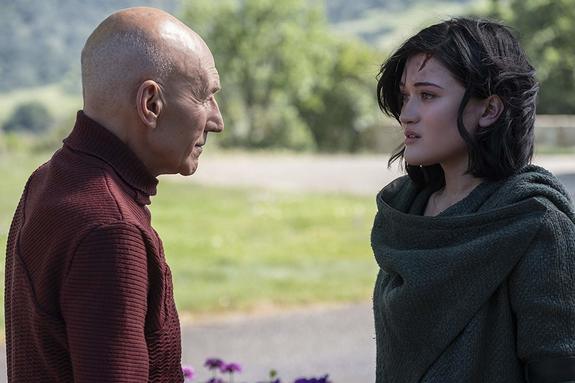 As far as first episodes go, I thought this was a pretty solid effort. Certainly it feels more of a genuine ‘Star Trek’ than anything in Star Trek: Discovery,  which is all good in my book. I suppose a lot of this is due to having as familiar (and iconic) a face as Jean Luc Picard (Sir Patrick Stewart) as the central protagonist.  I must confess to feeling a certain glow when I saw Picard and Data together wearing their old TNG uniforms- I rather think that Stewart and Brent Spiner must have gotten a bit of a kick filming that scene. Whats most surprising though is that this still remains a pretty clear departure from Star Trek of old, particularly from TNG. This Picard is a rather bitter, lonely and frustrated man in his twilight years questioning the institutions that once held such importance to him, and perhaps questioning his life, what he achieved, what was the point of it all.

Maybe I’m reading too much into it (this first episode hints at more than it delivers, but I expect its just teasing answers soon to come in subsequent instalments) but I rather fancied that this series could just have easily been titled Star Trek: Kirk had it been made a decade ago, and perhaps would have made a fascinating epilogue for both Kirk and William Shatner’s role in the franchise, had that been possible.

Bad timing for Shatner, great timing for Stewart then, who seems to be relishing the opportunity this series affords him.

A friend of mine from work who left a few years ago, and was an avid Trekkie who read all the books etc, dropped me a text over the weekend informing me that he’d watched the show. He seemed to enjoy it, but couldn’t help but wryly note that the show credited 18 producers. A sign of the times, I guess, but I did text him an observation that too many cooks can spoil the broth, and that the cohesive vision of, say, a Gene Roddenberry and Gene Coon, the two grand old masters of the original 1960s Trek, seems to be lost to us now. Star Trek: Discovery seemed to spend too much effort trying to be all things to everyone, getting lost in a spiralling mess in the process, and I only hope that this series goes its own path and maintains the promise of this fairly solid beginning.