Whatever happened to Mickey Rourke? Back in 1987 when this film was originally released, he was one of the biggest male stars in Hollywood, seemingly destined for great things. While I confess I was never really enamoured by him, I really did enjoy his performance in Alan Parker’s Angel Heart, and watching it again today after several years, I am even more impressed. He really was great in this, which only makes his fall from grace in Hollywood all the more mirror that of Harry Angel himself in this dark moody thriller. Its a genuinely great turn that proves the centre-point of the whole film.

Angel Heart is one of those films that somehow just seems to age incredibly well as the years go by. I didn’t catch it until a VHS rental and I was immediately taken by its dark oppressive atmosphere; the music score, the cinematography, the cast, the ‘twist’ that closes the film. It just seems so unlike anything we see today- indeed, the only film I think I can really compare it to is Adrian Lyne’s Jacob’s Ladder. Right from the start Angel Heart drags you in and doesn’t let go, its period setting quite mesmerising and otherworldly. I’ve watched it occasionally over the years since but never quite like this, in a finely remastered edition released on 4K no less. It looks grainy and gritty and beautiful, quite fantastic- really filmic (between this and the recent The Shining, 4K is on a roll). Certainly for anyone wondering, this is a worthy upgrade.

Angel Heart isn’t perfect, but its imperfections are fascinating. I’m assuming after all these years anyone reading this has already seen the film, but will skirt around any spoilers best I can. The main problem for the film is, ironically, its central ‘twist’ which has always bothered me the more I thought about it. It really doesn’t work unless something else is going on that we are not aware of; in fact watching this film again the other night I just got myself even more confused by the timeline it presents in its flashbacks and mythology. If someone is… someone, then how come nobody recognises him? Plastic surgery was hardly a ‘thing’ back then and his injuries were allegedly more psychological than physical, best as I could tell, so when he talks to people who knew Johnny Favourite, how come nobody twigs who it is they are talking to? Is it really just a case of an unreliable narrator and that we can trust nothing that we see, does he commit the hellish murders or are they enacted by his employer, following his trail? Am I asking too many questions? 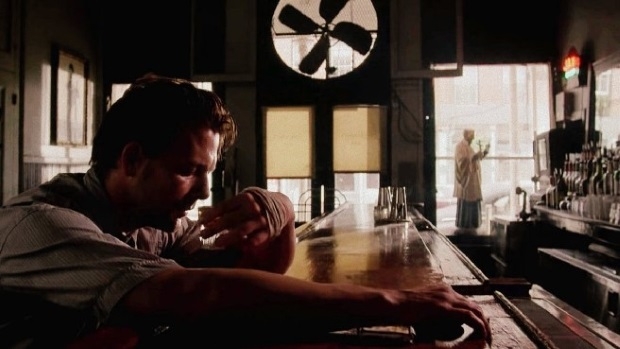 Strangely though I must confess I don’t really care- this is one of those films where the mood, the performances and the setting work so well that its internal lack of consistent logic doesn’t really matter. I’ve always considered Angel Heart a sort of Occult Blade Runner, in that its imagery and sound is such a huge part of the films success, and the funny thing about that is that Blade Runner too had a questionable internal logic, particularly in its theatrical cut that had all sorts of inconsistencies like number of Replicants etc. Angel Heart is a lot like that, but like Blade Runner, its world is so wonderful its almost irrelevant that it doesn’t really make much sense.

I really do like this movie though, and even more so in this new edition. Angel Heart has grown quite a cult reputation over the years, and deservedly so. Its quite haunting in places and my confusion may be mine alone, but it does make the oddly dreamlike experience all the more interesting. When we can see the devil sitting serenely in a church, you know something is seriously wrong with what we ‘know’ about religion, and I suspect the film deliberately makes us question our worldview and what we take for granted. I don’t believe I’ve ever heard Alan Parker’s commentary all the way through so shall make a point of listening to it sometime soon: a welcome bonus with this release is that all the extras have been ported over to the 4K disc instead of left on the Blu-ray only.