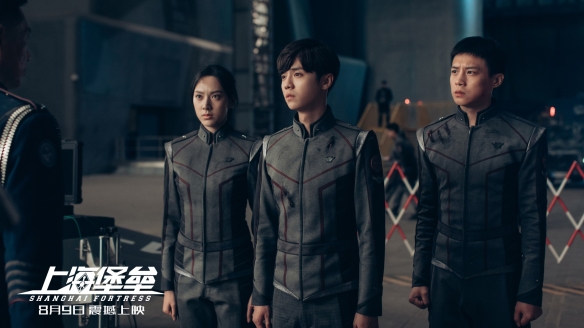 Hot on the heels of the utterly bonkers The Wandering Earth comes China’s version of Independence Day, the alien invasion thriller Shanghai Fortress, complete with your obligatory blitzkrieg of CGI aliens, aerial dogfights, explosions and collapsing skyscrapers. Some of the visuals are very good, and there is some fine imagery, but unfortunately they forgot to include a script. The Wandering Earth made little sense; this one makes no sense at all.

Unsurprisingly, all the eye candy in the world cannot save a genuinely bad film, and Shanghai Fortress flopped in spectacular fashion last month in its home territory, so much so that the director Teng Huatao issued a formal apology (they do things differently in China- imagine if Michael Bay had the decency to apologise for his Transformers films). Remarkably the film has already turned up on Netflix for veterans of The Wandering Earth to give Chinese sci-fi another go. Unfortunately as its theatrical box-office would suggest, Shanghai Express is a pretty poor, incoherent film full of plot-holes – at first I thought it might be down to bad subtitles/translation but its soon evident that the film really is just plain bad. The Wandering Earth was daft but kind of fun in its excess, this is just very dull.

The confusing plot involves an alien power source being discovered by Chinese astronauts on a (deep space?) mission that solves the worlds energy problems. Unfortunately, several years later some pissed-off aliens in a gigantic mothership arrive apparently looking to claim its power source back and promptly lays waste to any major city using it. Millions of humans are killed and every major population centre is turned to rubble, and Shanghai is, as the film begins, next on the list.

Now listen, just do yourself a favour and don’t think too hard about any of that. You might be perplexed that humanity has major energy problems but manages to send a ship on a deep space mission and not only manages alien contact but also steals a new power source from said aliens. The film in no way elaborates on who the aliens are or where they are from or how we stole the power source from them, its all just a perfunctory prologue awkwardly shown in a news bulletin before the CGI carnage ensues. It doesn’t mean anything, its all just an elaborate set-up to establish that there is an alien invasion in the offing and that the good people of Shanghai are our only hope. Mind, the people of the city are a fairly resilient lot, living under a protective energy shield they go on about their daily lives shopping and working and go to nightclubs in the evening, generally acting like Earth isn’t being invaded or that millions or even billions of humans haven’t died. Its all very odd. At least in Independence Day the American citizens knew it was time to get worried. 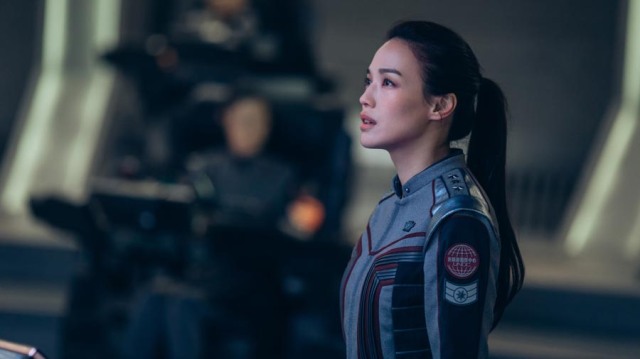 The cast do what they can with the underwritten and hackneyed characters, but the main lead, ace videogame pilot Jiang Yang (Lu Han, apparently a pop star rather than a ‘proper’ actor) has a cringe-worthy unrequited love affair with his beautiful military trainer Lin Lan (the very beautiful Shu Qi who is twenty years his senior and shares zero chemistry with him). The love affair seems to revolve around texting (stalking?) her and a flower that he hasn’t the nerve to give her. Its basically as complex as a student having a crush on his ‘hot’ teacher.

The odd thing is that towards the end of the film our heroes all start dying in CGI explosions, sacrificing themselves for the public good and its clear from the epic music score that we are meant to care but of course we can’t, they never feel like real people. Even our romantic leads don’t get the emotional pay-off we think they are going to get. One of them suddenly gets buried under a city of rubble (to maintain some sense of tension for any prospective viewers I won’t reveal which one) and that’s that, end of love affair and a subdued celebration when the aliens are thwarted. Except that Shanghai is such a submerged ruin at this point you have to wonder, did the aliens really lose?

Oh well. This Chinese sci-fi stuff is really weird and hopelessly juvenile. I never realised that Independence Day was so sophisticated.