This was great. An eight-part series based on a comic book that I’d never even heard of written by Garth Ennis, the same guy behind Preacher (a comic book which I read several years ago via the graphic novel reprints, and which was also turned into a tv series on Amazon). The Boys comic book was published between 20o6 and 2012, so as far as comic geeks are concerned, its ancient history already, but it’s interesting to note its ‘age’ because it possibly informs its approach. Basically it’s a superhero book that is consciously the opposite of all the standard comic book tropes of traditional Marvel/DC superheroes. It takes the premise of Alan Moore’s Watchmen, in postulating that superheroes are real and living in our real world, and what they and the world would be like- basically, what would the world be like if Superman was real? In Watchmen, Superman is Dr Manhattan, a scientist of the Cold War transformed into a being with Godlike powers, who grows increasingly withdrawn and distant from human affairs that unravel in his wake during the cold-war 1980s. In The Boys, Superman is Highlander, a complete and utter self-centered dangerous asshole who feels he is above the law- possibly above any authority in the world. Indeed, the superheroes here are as unaccountable as real-life celebrities appear to be in our world, using their power and wealth to manipulate the media in their favour (no, I don’t like celebrity culture).

Basically, in The Boys all the superheroes have gone Corporate, they are celebrities whose brands are used to sell anything from beers to cereals, and whose popularity and powers have generally corrupted them so that they become reckless and self-centered and endanger the safety of the public and the world at large. The title of both comic and tv show refers to “The Boys”, a clandestine group of ordinary people who are at odds with the superheroes, intent on breaking through the lies and abuse of their powers, uncovering the truth about them, revealing their wrongs and hunting them down… and blowing them up if necessary (or putting a power drill to the test). 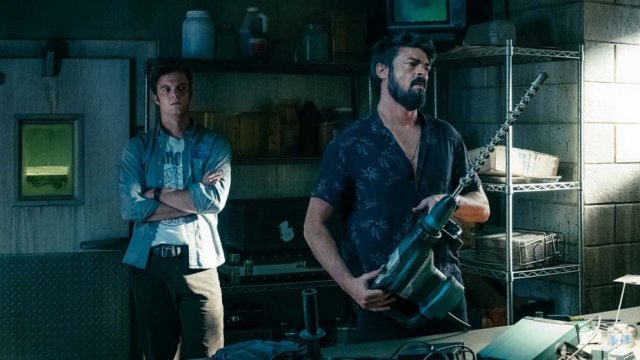 Even for someone like me who loves the Watchmen graphic novel and movie (and hopefully the HBO spin-off series incoming this Autumn), The Boys is like a breath of fresh air. It deliberately sets out to undermine the traditions of the genre, full of gratuitous violence, sex and swearing and sending up most every standard trope that is celebrated in most any Marvel or DC superhero movie. We like to imagine that most anyone given superpowers would be like Captain America or Spider Man or Ant Man, you know, basically good and decent and set on ‘doing the right thing’ but the truth is, people aren’t inherently noble, are not generally incorruptible- people are usually greedy and selfish and self-centered, and most people given super powers would as likely be jerks abusing those powers as they would becoming noble, selfless heroes.

These guys lie and kill with wild abandon, and with no supervillains to keep them in check or validate their existence they run amok abusing their powers/position and manipulate public opinion through corporate videos and events. We can recognise the manipulation of social media and celebrity culture and it all looks pretty realistic.

The Boys benefits from coming out of nowhere, I think, as it constantly surprises. I gather many things are changed from the original comic book (some characters have changed sex and race, for instance) but part of the fun remains spotting the representations of familiar superheroes like Superman, Wonder Woman, Batman and Aquaman, and how The Boys variants are shown as horrible jerks and twisted shadows of the DC counterparts. It can run fast and loose and isn’t at all weighed down by, say, seventy years of comics mythology that weighs down the traditional superhero characters- and as it deliberately intends to shock and surprise it just gets wilder and funnier and, yes, quite disturbing at times. The wanton gory human collateral of the superheroics is a brutal reminder of what the traditional genre movies rather forget- you cannot destroy skyscrapers or cities etc without killing dozens or hundreds of regular innocents, and watching HIghlander gorily cut apart dozens of ‘terrorists’ because they are not American, or leave a plane of civilians to die because he messed up the rescue, can be very sobering indeed. He could be a hero like Superman, but instead he’s an asshole, because he’s only human, afterall. And the Boys need to take him down.

Yeah, great stuff, and very well done. Its gory and violent and funny and quite a surreal commentary on the celebrity-obsessed, social media culture we are living in. The cast and the production design and scripts are terrific and I really can’t fault it at all. I look forward to season two next year.

2 thoughts on “The Boys: Season One”