The b&w magazine The Savage Sword of Conan was probably my favourite comic of the 1970s – well, I say comic, it was indeed a magazine, as it didn’t have to conform to the Comics Code Authority as the regular four-colour comic books of the Marvel line had to. It enabled the writers and artists to create longer and more ‘adult’ adaptations of Robert E Howard’s stories- it felt more authentic to me, as far as REH goes, a feeling which was reinforced by the magazine running text articles about REH or his books; it was where I first learned about Glenn Lord and his book The Last Celt, and Howard himself and all the stories he wrote. Although I first encountered Conan in the pages of the four-colour Conan the Barbarian drawn by Barry Windsor Smith, it was in Savage Sword that I felt I encountered the genuine Robert E Howard Conan that launched my love and appreciation for his stories, and my fascination with the writer himself.

I still have my old original issues of Savage Sword– original American editions and then later the Marvel UK edition (which lacked the background articles etc). I later bought the first few Dark Horse collected editions  from 2007/2008 that reprinted Savage Sword‘s Conan strips when Dark Horse acquired the Conan license from Marvel – big bulky paperback tomes a little like telephone directories, and really as cheap and nasty as that might sound. I always wished that one day they could be collected in hardback on quality paper with the attention the strips deserved. It was always an idle fancy. The magazine was decades old, of course, and I suppose old-fashioned, and the chance of anyone creating hardback editions for posterity seemed just that- an idle fancy. But over the years I’d look through my yellowing copies and often dream of a proper quality book collecting them.

Well, here we are, with Marvel having now re-acquired the rights to Conan from Dark Horse, this time it’s the original publisher collecting the originals and thank goodness, it has made them part of its Omnibus line, with hardback binding, quality glossy white paper (although I quite miss the old matte paper stock) and even including the supportive text articles and letters pages. Unfortunately, as the rights Marvel has now doesn’t seem to include all the REH characters, as this collection only features the main Conan strips, and not the support strips featuring characters like Kull or Solomon Kane. The only awkward thing about it is the sheer bulk of the thing- at 1,040 pages, it’s a bit of a monster, although I would have appreciated a larger page size- as the book is slightly reformatting the original magazine the pages are slightly reduced in size (in the examples here you may notice the slight window-banner at top and bottom detailing the issue number and omnibus page count), not helping my eyes at all. 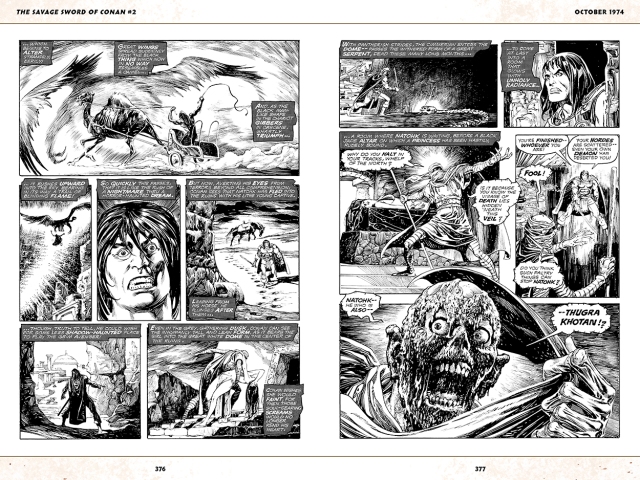 It really is a joy reading these stories again and seeing them in such a durable edition at long last. Whenever I read REH’s original Conan stories, it’s always the Savage Sword images that come to my mind, over and above that of Frank Frazetta’s famous oils. The magazine’s art was something really special, particularly as it was always in black and white with intricate detail most of the time, looking like old-fashioned classic illustrated book style and not at all like contemporary comic-books of the day. They always featured pretty extraordinary painted covers, too (and which are printed in colour in this edition, heading each reprinted issue), which rivalled anything on paperback covers- it looked and felt like something really special, and I used to read it over and over. Of course, part of my love and fascination was because it chiefly featured my favourite Marvel artist, John Buscema. To my mind, Buscema’s work reached whole new levels of majesty when the magazine featured his partnership with Alfredo Alcala, starting with an adaptation of REH’s Black Colossus. Alcala, a popular Filipino artist of some renown in his own right, served as an inker of Buscema’s pencil layouts but added much of his own embellishments and details. The stories they did together are some of my favourite pieces of comic art of all time.

Imagine my shock and surprise then, to be reading Roy Thomas’ lengthy introduction to this collection and discovering that John Buscema himself hated what Alcala did to his pencils! I still can’t believe it. I suppose, thinking about it, a lot of that embellishing and detail and texture that Alcala was adding was more Alcala’s own illustrative style – looking at his own comic-book art, it’s clear it looks very much like those Savage Sword  strips that I love. Indeed, perhaps too much like Alcala and too little like Buscema, from Buscema’s point of view. To me of course, it offered the best of both worlds- Buscema’s brilliant layouts and framing and the sumptuous old-school illustrative details of Alcala. But really, when I read all those stories I had no idea, and in the magazine’s letters pages most readers seemed to think the same as I did- the two artists were a magnificent partnership.

So there you go- you learn something new everyday.

While this omnibus is pretty expensive, for fans of old this is surely a must-buy, as they tend to have limited print runs and I have to wonder if there will ever be another reprint after having waited over 40 years for this one. Roll on The Savage Sword of Conan Omnibus 2 in November of this year. Meanwhile I need some new reading glasses…