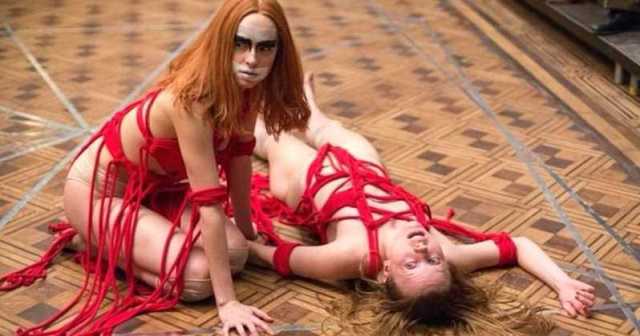 I’d been looking forward to this since I first saw the trailer; I’ve not seen the 1977 original, and know very little of it, so it’s impossible for me to judge this film in comparison to the original but that first glimpse back in July last year really had me intrigued. Part Twin Peaks, part Kubrick’s The Shining, it looked strange and creepy and wonderful.

Well, it’s certainly strange. Finally turning up on Amazon Prime at last, I looked a little harder and found the 4K stream in particular (Amazon loves to hide the 4K stuff away). This new Suspiria is beautiful to look at; both the cinematography and the art direction (dim lighting, lots of browns and beiges with a muted palette all over really) evokes a real sense of 1970s Germany, of coldness and lack of warmth, the setting having a sense of a marked absence of Nature. Considering the presumed pagan origins of this hidden coven of witches, that void of greens and natural light and warmth is rather telling us something, I suspect. This is like a Wicker Man in concrete.

My main issue with this  Suspiria is that, well, it’s not really scary, which you’ll have to excuse me, but it’s how I judge horror films. Like a number of recent films (Velvet Buzzsaw one of them) it really seems to be an arthouse film posing as a horror film. Failing that, its a film by a director mindfully too sophisticated to resort to usual horror film tropes, resulting in it failing to succeed as one. Sure, there’s a few sequences with some gore etc that may be of distaste to some viewers but as a horror film, it’s really something of a failure. Sure its moody but it has no real scares, or, most damning of all, any tension really.

Its clearly more an intellectual exercise than an emotional or nervy one. I can imagine the film having a tagline ‘for discerning audiences only’. This notion is only reinforced by the peculiar casting of Tilda Swinton as two characters- one the lead tutor of the dance school and the other an old man haunted by the loss of his great love decades before during the war. The make-up for this latter character is either impressive or plain peculiar and other than a technical exercise adds nothing to the film itself- if anything it just proves distracting. I had the feeling that the director Luca Guadagnino is trying to prove something, but I don’t know what. I kept expecting some twist revealing the that the witch and the therapist were either the same person or related somehow like brother and sister thus excusing or explaining the physical similarity between the two, but I was barking up the wrong tree. To me, it added nothing to the film, just left me wondering why they bothered. Perhaps the arthouse crowd think its ingenious.

Likewise there are multiple sub-plots that seem fairly pointless.  There’s a prologue in which a dancer, Patricia (Chloe Grace Moretz) has fled the school in fear for her life and soul and tensely warns her therapist (yep, Swinton in male guise), before running off into the night never to be seen again. It promised a threat of almost Lovecraftian hidden horrors but never delivered. There is a vague background noise of terrorist atrocities in the divided city that somehow Patricia is swept up by, but its all off-handed suggestion and not clear. We see a rural religious community in Ohio, America in which a woman (mother of our lead character Susie Bannon (Dakota Johnson)) lies on her deathbed. Susie will be cast out or leave from her own choice (it’s not really clear, unless I missed something) and finds herself in Germany auditioning to join the dance school. I suspect she was banished based on revelations at the end of the film.

Suspiria is interesting. Again, its an arthouse movie posing as a horror film and a director perhaps positioning it as an intellectual exercise rather than a deeply involving, tense or scary one. Sure, it has some unnerving moments but it also has long sections that don’t really do or say much of anything. Indeed, for a film that is so intellectual, it seems to have very little to say, or else its message is lost or passed me by. So much of it -the casting of Swinton in two roles, the period setting, the coven politics- didn’t really seem to amount to much of anything other than the director making some obtuse point. Something of a dissapointment really. Or perhaps I need a repeat viewing sometime if the curiosity ever impels me.