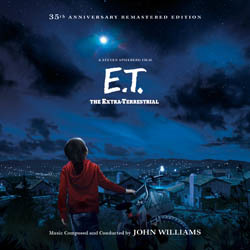 Well, here’s a twist. I’ve finally succumbed and ordered La La Land’s two-disc edition of the E.T. soundtrack. Released back in 2017 to celebrate the film’s 35th anniversary (as if I needed reminding I’m getting old) in an edition of 5,000 copies, La La Land revealed last week that the last batch of 500 copies have arrived from their manufacturer. So it seemed that the time was nigh to finally pull the trigger. Considering I’ve brought most of the other John Williams expansions of the last few years (really a quite remarkable run of discs/scores) buying this one was inevitable, but I’ve always had a love/hate relationship with this little critter in particular. The music is fine I guess (I had the original soundtrack release on cassette, eventually, once it dropped into a bargain bin) but it’s the damn movie, and the fact that it was such a flip-side of Blade Runner, both in style and in popular and critical response. Well, I guess I have to admit I bore a grudge for all these years, but I really struggled to even watch the film over those years since, considering it full of  Spielberg’s worst traits and excesses. I have a Blu-ray steelbook that I bought for some strange reason years ago that I have never watched.

But it does seem weird and rather silly on my part that the  music has always been lumped in with my general apathy for the film. Maybe this edition will make me warm to its charms. I will say this- listening to John William’s great scores again over this past few years of expansions, what has perhaps impressed me most is how well they have aged, and how well they stand up to the current crop of what passes for film scores these days. Jaws 1 & 2, The Fury, CE3K, 1941, Dracula, Superman: The Movie, The Empire of the Sun, and to a lesser extent Hook, are superb works that really shine brightly now that their style of film scoring has apparently become so redundant of late.

If only Vangelis’ Blade Runner score had received such care and attention for its own 35th anniversary. Well, I guess there’s always the fortieth anniversary (if we’re still buying music on CD by then)….