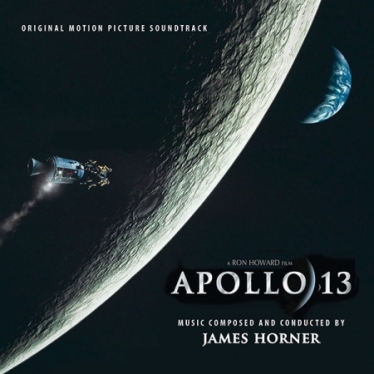 A few nights ago I rewatched Apollo 13 on Blu-ray. Mostly, I watched it because the new expanded CD of the soundtrack was due in the post this week, and I was curious to rewatch the film again and get a reminder of how the music worked in it- and fortunately Claire ranks the film among her own top ten films so it was easy to talk her round to it (there’s nothing more odd than an individual’s favourite films, I find).

Curiously, the last time I watched the film was in 2015, not long after James Horner passed away in an air accident- in a way, it was an attempt to honour his memory by watching a few films that he had worked on (I remember Field of Dreams was one of them, as well as Apollo 13). So James Horner’s memory worked its trick again, in a roundabout way, getting me to rewatch Apollo 13 again.

I have a sort of love/hate relationship with Apollo 13 that I have mentioned before and won’t get into again. Basically, its that while the film’s subject matter is right up my street and the cast features some of my favourite actors, there is a sense of cynical manipulation and dialogue driven hand holding that pulls me out of it. But whatever issues I have with the film, the score isn’t one of them, and while some may take issue with it as a seperate listening experience, within the film itself its works like gangbusters, one of the best examples of how well James Horner wrote music to suit its film and its beats and moods.

Anyway- as expected, this new edition arrived in the post today. Intrada’s new release of the score is across two discs but there is a lot of repetition/redundancy at work here to ensure its as complete as fans would desire. The first disc features the complete score and isolated electronic cues that feature within the film, and the second disc an original album assembly created by Horner that failed to materialise, replaced at the time by a curio release that featured key Horner music amongst songs used as source music within the film, as well as sound effects and dialogue. The first disc separates the orchestral score and the electronic cues later added by Horner, but an alternate track listing in the booklet will enable listeners to program the score with the electronic cues in chronological order as heard in the film. The second disc is largely a repeat of the orchestral score on the first disc and follows a soundtrack tradition of featuring discs of original score albums alongside the fully expanded discs- the irony here being that the original score album never got its intended release at the time (it was later released as a promo from which a bootleg was widely circulated). Fans buying this release won’t be at all bothered, but I imagine Joe Public would look at it at being a bit of a rip-off being sold a two-disc set with two discs that are essentially the same- not that Joe Public is really the target audience for something like this, that old horrible curio release would suit them fine I expect. The biggest selling-point is the remastering, as this music really shines here, and new detail can be heard all over.

It can’t be denied this is a great Horner score and I’m certain this release will seem long overdue for fans. It has a great main theme and some lovely orchestrations featuring a choir and Annie Lennox doing some very effective and emotive wordless vocals. All Systems Go -The Launch  is a ten-minute powerhouse of score music that I remember back when the film came out just blew me away- back then it seemed every Horner score had music like this, stirring music that sounded new and exciting (which is an irony considering how plagued Horner later was by accusations of plagiarizing his own work) and it would be fascinating to see the scene with and without the music to demonstrate how well it served the film. Elsewhere there are examples of Horner’s talent for Americana-like music, patriotic and uplifting, and yes, plenty of music similar to other Horner works (a surprising amount of Brainstorm, I think), but you know, the Beatles sound like the Beatles, and Prince sounds like Prince, and with James Horner gone now, we have no opportunity to hear ‘new’ music, and I’ve found myself making peace with all those Hornerisms that used to drive me batty later in his career. Absence, they say, makes the heart grow fonder. That all said, there is some really original music here (Docking, and Dark Side of the Moon, for example) that stand as some of the most memorable pieces of his career.

The simple truth is that, whatever one’s views on Horner’s music, its film music such as this, lyrical and melodious that can be hummed and whistled walking out of the cinema, that has become increasingly rare and unfashionable in films. You just don’t hear scores like this anymore, really, and while I wouldn’t even say this film or score is particularly old, it feels like it- this release is a very welcome reminder not just of a great talent lost but also a style of film music that we have lost too.

James Horner’s music is a powerful part of the success of this film and this release is surely one to be treasured by fans of both Horner and the film itself. I know I keep on saying this, but it’s increasingly true- as time moves on, and the physical formats like CD continue to wane, these expanded and remastered releases will just get more rare and eventually will be gone. I consider myself lucky I’m around now and able to afford to import the ones that get my interest, and yes, Apollo 13 is a great way to start 2019.