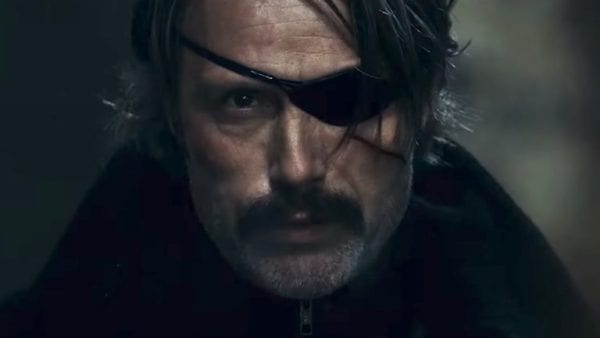 There’s a certain modern angst in Netflix’s latest film release, Polar– Duncan, the ‘Black Kaiser’, is a middle-aged assassin nearing retirement but his employer Blut has his own eyes on the assassin’s hefty pension pot, and in the grand tradition of the corporate world screwing over the small guy, Blut puts out a contract for his super-team of assassins to retire Duncan permanently, and ensure that Blut takes the pension pot for himself.

That premise of being screwed-over by the corporate world is pretty much the best that Polar has to offer, because other than that, its ridiculously silly style-over-substance that suffers from appalling execution (sic).  Unsurprisingly, it’s based on a graphic novel which betrays its lack of subtlety or considered thinking- you can get away with things in comics, no matter how ‘adult’ they like to pretend to be, that movies just cannot manage. Polar comes across like a Tarantino-wannabe, straining to be cool and stylish and broken with jarring acts of violence and gore and a bodycount that might seem fun and exciting on a comic page but just seems preposterous and extreme up on the screen.

So yeah, Mads Mikkelsen is clearly slumming in this, but perhaps he can be forgiven for attempting a shot at the superhero/comicstrip genre, as everyone else seems to be doing it. He lends Duncan a certain weight and pathos that the film is quite undeserving of- his character is haunted by his violent past and unable to relate properly with normal, civilised folk, and prepares for retirement up in the wintry north in a log-cabin, spending his nights renting movies and getting drunk. He buys a puppy for company and its an indication of how violent/silly/stupid the film is that within minutes he’s shot the dog dead in what the film thinks is a moment of humour. Okay, as a dog owner I’ll put my hands up- no film that kills a dog for a laugh or dumb shock is going to get a pass in my book, but in  some ways this is the least of the films issues.

I was totally unprepared for a cameo by Richard Dreyfuss, of all people. I can forgive Mads for having a stab at this comic-book nonsense, but what on earth is Dreyfuss doing slumming in this? Is this an indication he’s destined to start appearing in all sorts of such nonsense for a fast paycheck as his own pension draws near? Say it isn’t so, Richard. The guy who starred in Jaws and CE3K deserves better. Hollywood owes him better parts, better films, period.

So anyway, if you’re sitting with (several) beers and are in the mood for gory mindless antics and don’t mind being taken for a schmuck, you need look no further, Polar will satisfy you no end. No doubt a sequel gets announced next week.