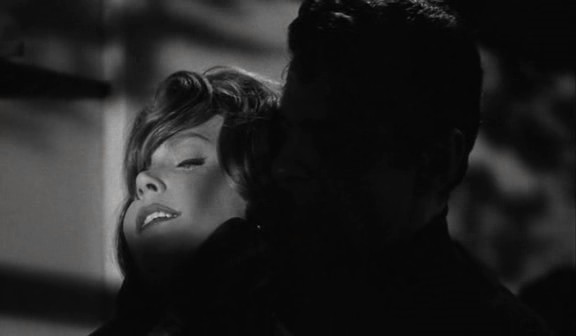 Alas, perhaps I simply wasn’t in the mood. To paraphrase a movie line somewhere, “moods aren’t for movies, boy!” but sometimes you sit down with a movie and it just doesn’t click the way you know it should. Its like a first date that goes awry or a job interview that starts badly. I should know better after so many years watching movies- I’d likely have been better calling a halt to it and putting something else on, leaving Experiment in Terror for some other night.

Perhaps its was simply from watching this bank heist caper too soon after the simply brilliant Cash on Demand a few weeks before. The two films could not be more wildly different, albeit the criminal subject matter notwithstanding. Cash on Demand was an intimate psychological drama whereas this was more a film-noir police procedural, and somehow it just felt a little bland. Wrong film, wrong time.

Beautiful, young bank-teller Kelly Sherwood (Lee Remick, great as ever) arrives home and is threatened by a man whose face she cannot see. The man wants her to rob the bank she works at of $100,000, and if she fails to accede to his demand he promises he will harm both her and her 16-year-old sister Toby (Stephanie Powers). This tense and rather claustrophobic scene (mostly a close-up of Kelly’s terrified face, her assailant behind her with a hand around her neck) promises much, and after the man disappears into the night telling her that she is being watched at all times and not to get in touch with the law, we seem to be in for a promising cat and mouse thriller.

Unfortunately she goes straight to the law, ringing the FBI and setting up the police procedural thriller that the film really is as Glenn Ford’s agent Ripley sets about uncovering who the mystery villain is and apprehending him before either Kelly is forced to rob the bank or she or her sister are hurt. Its a fine enough thriller but not the one I was expecting- again, maybe it was just the wrong film on the wrong night. Getting the FBI involved just seemed to emasculate Lee Remick’s character too much; it left her a victim and less of a protagonist, but perhaps I’m just too used to female empowerment in modern movies.  This film was made in 1962, after all, and women needed saving by men back then.