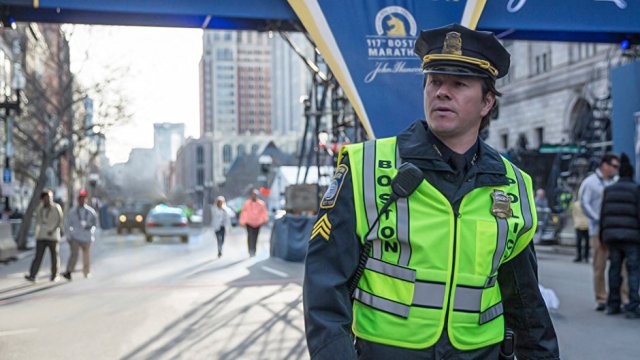 On the face of it, Patriots Day is a great, taut thriller recounting the dramatic events of the Boston marathon bombing of 2013. Even for viewers fully aware of what happened, the film manages a relentless sense of tension as everything unfolds, and it’s certainly very efficiently staged.

However, it’s also a Hollywood movie, so it’s filled with all sorts of well-known faces, and this may just be my own personal thing, but it always distracts me somewhat from what should be a riveting docu drama account when I see some guy from the latest King Kong film or Justice League or those mobile ads on British tv. It’s no fault of the actors themselves (and indeed it’s great seeing Kevin Bacon doing some proper acting for once), but just seeing their faces pull me out of it all a little, whereas it might be thoroughly engaging with a cast of unknowns. There’s an awful lot of distracting cinematic baggage being carried around in some of these scenes.

Moreover, I clearly have a problem with Mark Wahlberg, a guy who irritates me in most films he appears in, and moreso here when I learned his character is entirely fictional in this film. His character is obviously a construct to enable the narrative flow of the events to centre on one character that the audience can ‘root’ for, but unfortunately it feels… I don’t know; manipulative? All films are manipulative, but a film like this that purports, quite rightfully to some degree, to be very accurate in depicting the events and those real people who were caught up in in it, to then throw up a main antagonist who didn’t exist…. I don’t know. Maybe me real problem is my dislike for Wahlberg. For me he is Wahlberg, always Wahlberg, an extremely limited actor who somehow remains very popular with audiences and is a very successful producer (if only he’s remain behind the camera).  It doesn’t help that some of his speeches here are so on the nose and awkward, or that he always seems to be where something is happening (its as if he has a twin, how he manages to pop up all the time). He’s unnecessary, he’s irritating. It’s like he’s there just to bankroll/sell the movie, which is a shame, the subject should be enough.

So anyway, Patriots Day is, with some reservations regards polemic politics/patriotism and certain casting choices, a very good thriller and a commendable film about recent real-life events. It’s a pity that the British film industry hasn’t yet found it worthy to make a film about similar events in our own country, but films about a bear seem to be an easier sell to a country depressed enough about Brexit etc.

6 thoughts on “A Day for Heroes: Patriots Day”