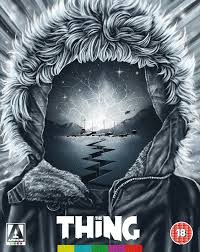 The other night when I watched this, it was dark early and getting cold outside and I commentated to my wife that it was a perfect night to watch The Thing. “Who on Earth would consider releasing this in the summer?” I said, shaking my head. “But of course, they did- in the middle of June in fact.” My wife is hardly concerned with the vagaries of film releasing and marketing, but even she can see the insanity of releasing a horror film such as this in high summer.

I suppose studios back then thought -and maybe they still do- that big films simply have to be released in the summer per the example set by Jaws and all those summer hits that followed annually ever after. But The Thing is such a winter horror movie its frankly mind-boggling to consider audiences walking out of a showing reaching for ice cream and a chilled coke in dazzling hot sunshine. It’s almost indecent.

Anyway, this edition of The Thing is simply perfect. The film has never looked or sounded better and all the old extras are there as well as a few new ones. Well, to be fair the new ones are a bit meh – I turned the new commentary track off after about twenty minutes of inane podcast-worthy chatter. Maybe I’ll give it another go, see if it settles down, but how does anyone do a lousy commentary track for a film like The Thing? Incredible. Someone give me a microphone and I’ll show how a quality commentary track should be done for a film such as this. A new feature-length doc has a welcome focus on the original short story and the Howard Hawks film, but offers little new regards the Carpenter film. There’s an interview panel with a few of the cast from 2017. A featurette about all the genre films from 1982 and how they suffered the wrath of a cute ugly alien suggests a nostalgic glow but slips into a talking-heads piece offering, again, little new. But in anycase, its the film that matters and it’s indeed never looked as good as this. Its a real pleasure to watch it looking so amazingly good.

Oh, and there’s a particularly good fan-short, The Thing: 27,000 Hours,  inspired by the film that is just brilliant and a lovely hint at what a sequel might have been like…

3 thoughts on “SomeTHING Arrow this way comes…”