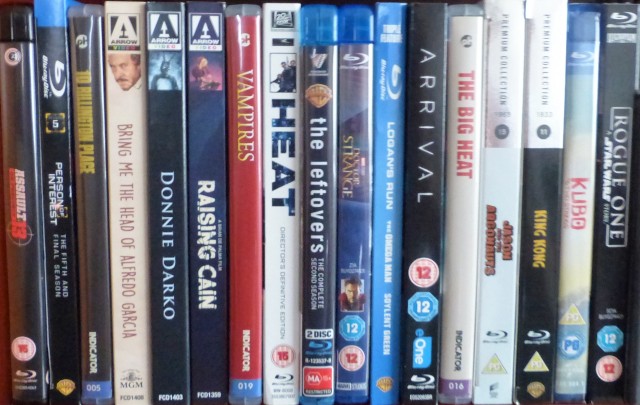 I’ve bought a few discs lately, which is putting into question my intent to curtail the expenditure this year and be a bit more selective, and required another updated photo of this year’s shelf. Beginning to wonder if I’m managing to keep the quality level up. So what of the additions since last time?

The Big Heat – Another Indicator release, and it’s clear those boys are after my wallet this year. Watched this only last night (review coming up sometime soon) and it was brilliant. Hadn’t seen this before, but as I love Film Noir (my second favourite film genre) it was a must-purchase, particularly as it was recommended online. It deserves all the praise, its excellent, and deserving special mention regards this Indicator release is that it features one of the very best booklets I’ve ever seen released with a disc.

Jason & The Argonauts – An old childhood favourite, and an excellent Blu-ray edition. The trouble with catalogue titles is that if you want more of them, and want them with plentiful extras and TLC, then you have to buy them, particularly now with physical disc sales diminishing. If you don’t buy ’em, they won’t release ’em- with that logic, it’s clear it is going to be an expensive year for Harryhausen films on blu-ray, with Indicator having several coming up. The cunning devils. I tell you, I may as well hand them my wallet.

KIng Kong – I love this film. Another of those HMV exclusives that required a journey into darkness/in-store purchase. This is a nice package with a nice booklet, but I have a fancy R1 DVD copy in an embossed tin-box package with same extras etc (which is what this HD release is based on, although it came in a digibook in the States). Tempted to get it out and pop these blu-ray discs in place of the DVDs, so there may be a transformation in the 2017 selections’ next update. Looking forward to giving this a spin late at night sometime. Can’t beat curling up with this film around midnight.

Kubo and the Two Strings- I’d never even heard of this until it was released on disc early this year, and read some glowing reviews that put it on my watchlist. Amazon dropping it to a fiver last week was too good an offer to refuse (note to self: ignore sales/offers as much as possible in future. Maybe stop browsing online altogether. It won’t end well).  Very curious about this one as I usually love this kind of stuff.

Rogue One– An inevitable purchase and what I’ll most likely be watching tonight. We’ll see if it measures up on another viewing (particularly regards how CGI Tarkin and Leia look on a smaller screen).

Well I’m off to hide in a hole so I won’t be able to buy anymore discs for a bit. Need to watch a few of these first (Garcia– I can’t believe I haven’t gotten around to watching Garcia yet!).