Hail, Caesar! is the Coen Brother’s rather affectionate ode to the Golden Age of Hollywood. There’s little mystery to why the critics lapped this up- for anyone who loves those 1950s Hollywood classics that many of us grew up with on television, whether it be the biblical epics, innocent Westerns or musical extravaganzas, this seems like a love-letter to a lost age when the old Studio system yet reigned. Its full of elaborate sequences of films being shot in the manner of Golden Age movies, like complex musical numbers and huge spectacles that are rich with nostalgia for the period. I’m not so sure though that it actually works as a movie in itself, which is likely why the public weren’t so enamoured with it. Besides, many of the in-jokes and film-genre references are likely lost on any viewer under the age of forty unless they are film-lovers enough to watch the cinema of that era (most of my colleagues at work are largely ignorant of films made prior to 1980, unless Lucas was involved).

One of the problems is an unfocused script, with myriad plots and sub-plots vying for attention. The central character, and unlikely ‘hero’, is Eddie Mannix (Josh Brolin), the head of Capitol Pictures who is overseeing film projects and the lives and careers of the talent signed to his studio.  If a starlet becomes pregnant or a star is caught in a compromising position with someone who isn’t his wife, Mannix is the man to step in and sort it out. If the tabloids get a potentially damaging scoop, Mannix knows how to strike a deal with a more favourably-scripted scoop instead. If your star lead in your major blockbuster of the year disappears from set mid-production, its just one more problem for Mannix to solve. 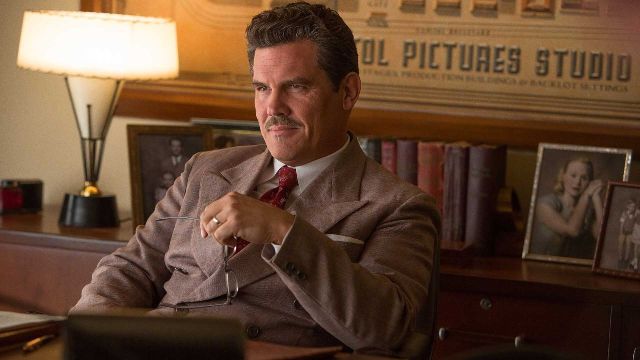 The secret to Mannix’s success is that he lives and breathes the movies; its truly in his blood. During the course of the film he is approached by Lockheed with a major management post, the Lockheed rep promising him a career in something with a future, something more important than a management job in a silly business like film-making. The rep doesn’t understand that his overtures are a lost cause, but he is right about a career with a future- films might have a future, but the studio system and the film-making so beloved by Mannnix is surely doomed. There is a sadness that is woven inside the jokes and warmth of the film studio depicted here. Time is running out for these kinds of movies and movie-making, and studio heads like Mannix.

Film within-film Hail Ceasar! is a biblical epic in the tradition of Ben Hur, which falls into production woes when its star  Baird Whitlock (George Clooney) is kidnapped in a Communist plot that intends to ultimately undermine the Studio system so beloved by Mannix. Mannix has to manage the costs of the delayed production whilst negotiating Whitlock’s return, whilst juggling all the other daily problems that arise for his attention.

Its all fairly chaotic with a great cast possibly actually wasted, as they are spread rather thinly to the point of being just cameos. But the film is warm and affectionate, and while I’d hesitate to describe it as genuinely funny, it is quite fun. Some of the on-set recreations of movies of that era are very complex, like a musical number involving sailors singing and dancing in a bar that is an obvious ode to the films of Gene Kelly. Also, the ‘real-life’ sequences involving the kidnap of and hunt for kidnapped star Whitlock are shot like they belong in a Hitchcock thriller. Its homages within homages, films within films within films. Whether it actually makes for a good film in of itself is open to some debate. Maybe it improves with repeat viewings- it wouldn’t be the first time a Coen Brothers film sneaked up on me over the years.

Clearly a film made by and for film-lovers then. Not quite the resounding success I had expected it to be, but worth watching nonetheless.