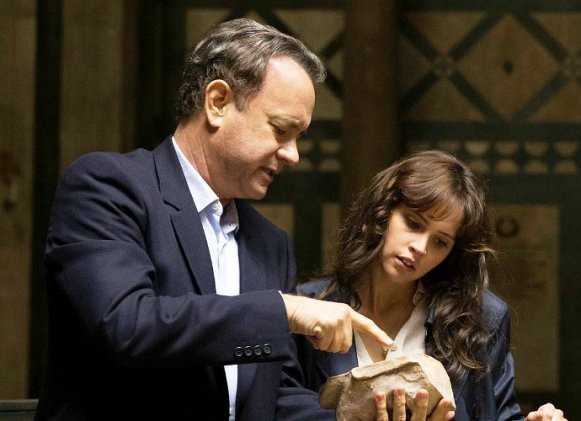 Inferno benefits, at the very least, by having a fairly reliable race-against-time plot to ensure the pace never really lets up enough that anyone really has time to consider how daft everything is. The problem only arises afterwards when you think back and consider how implausible it all is and how it starts to collapse into all of its the plot-holes when given any thought.

In that sense of course its no different than the previous two films, but I guess on the plus side, Inferno lacks the pomposity and self-seriousness that weighed them down- I don’t really think Inferno takes itself at all seriously at any time during its breezy two hours. Indeed, compared to The Da Vinci Code and Angels & Demons, Inferno feels decidedly lightweight. For the first time, I think the film-makers have cottoned on to how daft and badly written the Dan Brown books really are and have delivered a film the books deserve. Its a b-movie that knows its a b-movie.

The stakes are certainly higher this time around- the fate of the whole world hangs in the balance here. Billionaire nut-job Betrand Zobrist (Ben Foster, probably too good for this film, like pretty much everyone else in it, to be honest) is convinced that he can save the world by killing half the human population with a plague he has designed- the Inferno virus. He sets the deadly virus in a bomb in a bag (seen any unattended bags just laying around lately?) and then goes on the run so the Good Guys of the World Health Organisation can’t catch him and torture the bombs location out of him. Why on earth, having got virus and bomb all ready, that he doesn’t just trigger the damn thing and be done with it escapes my understanding. Anyway, he throws himself off a tower and dies. Somewhere a deadly bomb is going to go off and launch a plague that will kill billions. It could be anywhere.

So as usual with Dan Brown’s stuff, the daftness is launched almost immediately. The bomb is going to go off at a certain time and to ensure that it all goes to plan Zobrist has left elaborate clues based on Dante’s vision of Hell so that his girlfriend can ensure that the bomb will indeed go off. I mean, what? The same clues that can ensure the good guys can find the bomb and ensure it doesn’t go off? What? The same clues that ensure that some bad guys can get the bomb and sell it to the highest maniac bidder? What?

It feels that this film is just a few years too late (it is, after all, some seven years since the second film). Tom Hanks is dependable as ever but even he looks tired and disinterested this time around. The one genuine plus point for this film is Felicity Jones as his doctor, who just happens to be a huge superfan since her childhood of Robert Langdon’s books on symbols (what?) and elects to assist Langdon as he launches into his quest to unravel Zobrist’s clues by visiting museums and messing up historical facts. Jones is earnest in her role and seems to be having some fun with it all, as is Irrfan Khan who leads a shadowy organisation that despots and Bond villains hire to hide conspiracies (you know, the guys who hide the truth about who killed JFK and who was really behind 9/11- you’ll find them in Yellow Pages or something). There’s a few twists and good guys turning out to be bad and a few bad guys gaining a conscience (well killing a few billion people mist be bad for business, after all). Its a Dan Brown movie.

Even Hans Zimmer’s score, ditching the high strings and religious choirs of the previous films in favour of noisy electronic muzak, betrays a lack of effort that seems to run through the film- at least the last two films had decent scores that raised their profile; this noise is hardly music at all.

I haven’t read the book, but my wife has and it was her fault we watched this at the cinema (well, that and a cinema voucher for her birthday), and it has to be said she was more disappointed by the film than I (like I had any expectations to disappoint, aha). It turns out that the film-makers changed the ending from that of the book, which had a rather more downbeat conclusion. I must say after she told me about it, I had to agree that the books ending would at least have offered an unusual twist on what viewers may have expected at the start (I mean, we all know how these things are going to turn out, don’t we?). Perhaps that would have been a saving grace for such a lightweight film, having a darker conclusion than one might expect. Hollywood does like its moral high ground though, doesn’t it, and the good guys always win, even if we are past caring at this point.