I can’t put my finger on it, but there’s something endlessly rewatchable about Danny Boyle’s Sunshine. I must watch it once, sometimes two or more, times a year. Infact, of all the films made in the last twenty years, its one of the few that I have rewatched several times since its release, and possibly the one I have rewatched the most. It’s not a huge blockbuster, it wasn’t even particularly a success, either financially or critically, on its release, but something about the film just ‘clicks’.

Part of it might be that it’s like a Sci-Fi Greatest Hits. It takes elements of Alien, The Black Hole, Event Horizon, and 2001: A Space Odyssey, amongst others. There’s all sorts of stuff in the film that can be recognised from other films, but for once it doesn’t really irritate. For one thing, it might be imitating other films but it’s doing so with a small budget and pulling it off well too. It looks fantastic on a budget of something like $30 million- compared to bigger films it looks remarkable and shows what is possible with careful planning and craftsmanship.  Really it’s astonishing how good the film looks for what it cost and it stands as some kind of testament to what can be done. Most importantly, the film has a genuine sincerity to how it borrows from the other films, a genuine care and appreciation and respect to those films. It doesn’t feel like a rip-off, or anything remotely negative.

When the crew sits down around a table to eat together, of course it brings to mind the similar scenes from Alien; the set design, the banter, all of that, but you sense that Boyle is being respectful of Alien, not simply ripping it off. Its something that resonates so well from Alien that Boyle and writer Alex Garland obviously felt it was the right way to introduce the characters and the setting. Some shots even seem choreographed to echo shots from Alien– look at the scene when Cillian Murphy’s Capa fills the foreground and extreme right of the frame when he is informed its his decision regards diverting to the Icarus One: it perfectly copies an early scene in Alien with Veronica Cartwright’s Lambert filling the same part of the frame when she is told she is on the excursion team and she mutters “shit” in response, just as Capa voices his own bitterness at having to make his decision.

The characters are a big part of Sunshine. The cast is diverse and top-class, but wisely lacking huge ‘star’ names that might distract (although inevitably some of the cast are certainly ‘star’ names now from more successful ventures since). All of the cast bring their A-game and something to their characters, and the film is carefully threaded with character beats and moments that are important. Not all of them are likeable- some of them irritate but only because they seem so genuine and convincing with their flaws and mistakes. There is a sense that they have been stuck together for sixteen months and frictions are brewing as well as friendships. It always seems convincing to me, how they relate to one another and interact. It’s all very well-written, well performed and well-observed/directed. 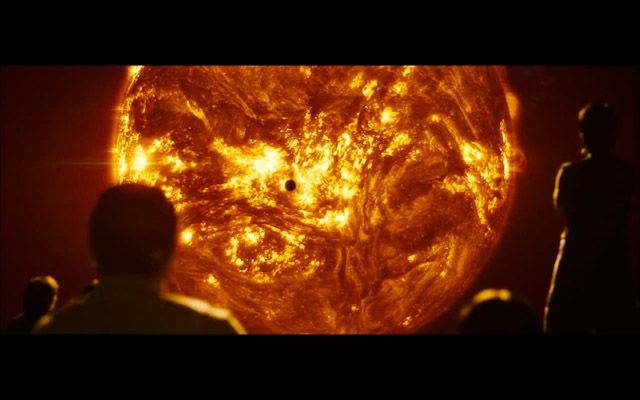 Some moments in Sunshine are extraordinary, like when the crew all gather at the viewing port to witness the transit of Mercury across the Sun. It is a beautiful and awe-inspiring spectacle, with a real sense of the wonder and majesty of space that most films would make us think mundane. But more than just the magnificent visuals and music, Boyle takes time to examine the faces of the crew so we can compare and contrast their seperate reactions to what they are watching. It informs us subtly what they are thinking, and where they are ‘at’ regards the mission, in a much more profound way than simply through dialogue and exposition. Its one of my favourite moments from any science fiction film.

Its when Sunshine slips into Event Horizon territory that most viewers seem to think it jumps the shark. I like Event Horizon, I think it’s the best Alien film that isn’t part of the official franchise (and to my mind is likely a better Alien film than Resurrection or Prometheus or even -controversial!-  Aliens). And I certainly don’t mind when things go all apeshit as the Space Madness-inflicted Pinbacker runs amok. What’s so nuts about a Captain whose mind has collapsed under the stress of his mission, in the face of sights no human has likely witnessed before? Its something that the transit of Mercury scene surely portends, in how the Icarus 2 crew react to what they see. Some are awed, some are bored.  Pinbacker saw stuff like that and saw God. His brain pulls a Hal 9000 and he kills his crew and aborts the mission thinking he’s doing The Right Thing.  Boyle and Garland are reaching to 2001 here even when they slip towards exploitation-horror territory. What does ‘Space’ really mean, or our place in this vast unthinking/unfeeling universe when you are millions of miles from home trapped in a steel can on a likely one-way mission probably destined to fail? What does that mean when that failure dooms all of humanity? You can’t wrap your head around stuff like that. It could drive you nuts and with Pinbacker it does (even the name Pinbacker nods to a character in the John Carpenter comedy Dark Star, itself an anti-2001, another example of the thought and respect running throughout Sunshine with its nods to past films).

Yes, Sunshine suddenly shifts in tone from semi-serious 2001/Alien hybrid towards a slasher flick, but you have to appreciate what Garland and Boyle are doing. They are making a science fiction film to entertain, and are no doubt enjoying taking the risk in pulling the rug from under the audience’s feet.  Its also adding dramatic conflict to the piece and ramping up the tensions regards will they/won’t they succeed in nuking the sun. It’s putting greater and greater obstacles in front of Capa and forcing sacrifices from the remainder of the Icarus 2 crew. And even though they succeed, no-one on Earth will ever know what happened or what sacrifices they had to make or tasks they endured.

You either buy it or you don’t, I guess. But I think Sunshine is a hugely satisfying and rewarding little film far superior to so many bigger-budgeted blockbusters. I wish it might have been successful enough to enable more similarly-themed, similarly-budgeted films. You don’t have to spend $200 million to make a convincing and entertaining space movie, and for all that critics moan about its last third, it still isn’t likely as daft and nonsensical as Christopher Nolan’s Interstellar, for instance. Sunshine is the little guy that done good.  I only wish Garland and Boyle might one day return to the genre again, and make another great little sci-fi movie together.

4 thoughts on “Another Sunshine Reprise”