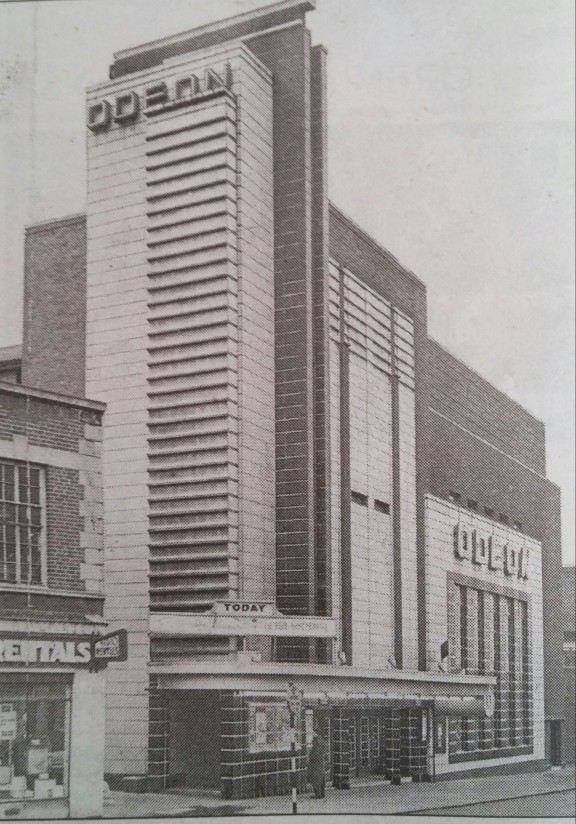 Found this old photograph in our local newspaper. A blast from the past- the old Odeon Cinema in town.

This, folks, is where the magic used to happen. This is where I saw Star Wars and CE3K back in 1978, The Black Hole in 1980, The Empire Strikes Back later in 1980, and a pretty mind-blowing (at the time) Star Wars/The Empire Strikes Back double-bill prior to the release of Return of the Jedi (possibly in 1982 or 1983, I’m not sure). People used to queue outside around the corner in long lines, whatever the weather- there was no reserved seating, it was first-come, first-served.

I remember back when I saw that Star Wars/Empire double-bill, I got there with my mate a few hours before it was due to start and we couldn’t figure out why there wasn’t a queue- was I ever that young and innocent, and those two films such a big deal to me, that I couldn’t figure out why there wasn’t any crowds? Then again, there was no VHS or home video of any kind back then; the opportunity to rewatch a Star Wars film was a rare thing, a Big Deal. And of course, this was long before those Special Editions, these were the Real Deal (not that we knew it back then- Ignorance is such bliss).

There were just three screens- one main one (Screen One, naturally) with two much smaller ones added under the main screen’s balcony seating (what was originally the stall seating before the cinema was split into three screens). As a sign of how things changed since, it seems odd now to recall that back then people could smoke in there- non-smokers sitting on the left side, smokers on the right side (not sure what the logic was in that, but Screen One was pretty large with a huge vaulted ceiling that took care of most of the horrible smoke). It was such a beautiful art deco building, inside and out; I wasn’t old enough to really appreciate it back then, but the ornate plaster scroll-work that decorated and embellished the walls and ceiling was always something amazing to me.

Sure the seats were old and creaky and frayed if not actually empty of most of the original stuffing, the projection system hardly crystal-clear, and the sound system may have been stereo but the speakers usually groaned and farted like a Monty Python sketch under the strain when things got noisy. I guess we’d be spoiled by multiplexes years later but I rather miss some of the atmosphere of that old place. Films were events back then, and the walk up stairs from the ticket office booth into a plush lobby with seats and film posters always seemed ‘classy’, and walking up the next set of stairs into the balcony seating of Screen One and its darkened Theatre was always a thrill. I rather miss the place. I’d love the opportunity to relive that whole moviegoing experience.

Yeah, its a Bingo Hall now. Has been some twenty years, probably longer than that now that I think about it, so all that moviegoing experience has been long gone. We’ve gained a lot technologically from the multiplex way of doing things, but we have lost some of the atmosphere of old cinemas like that one.

2 thoughts on “Not Quite A Theatre of Dreams…”