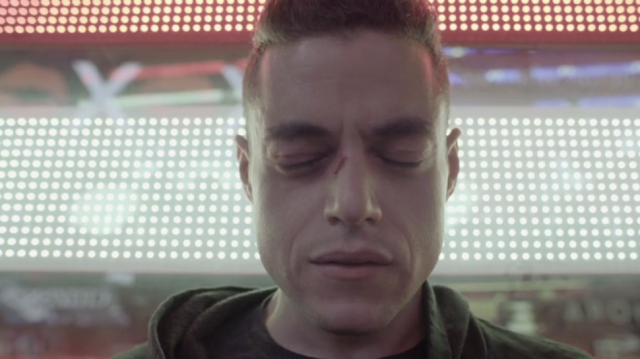 The first rule of Mr Robot is that you don’t talk about Mr Robot. I could gush about how brilliant it is (and I will), but I can’t back that up with any reasons because, well, that would spoil the experience of actually watching it. Everything really has to be kept vague and inevitably mysterious but that’s sort of what the show is, it kind of sums up Mr Robot. You’re not really sure exactly what kind of show it is that you are watching, it keeps on shifting and twisting. And that ‘first rule’ stuff might sound very Fight Club but there’s a reason for that. Mr Robot is like some kind of love-child of Fight Club and The Matrix, except it’s possibly actually cooler than either. Its that good.

So anyway, keeping things vague and spoiler-free.  Rami Malek is outstanding as nerdy nihilist hacker Elliot Anderson. His socially-challenged, drug-dependant character is an incredible performance, really nuanced, so much conveyed in his eyes, in his expressions… really incredible work. Christian Slater is great. All the cast is great. The photography is never less than gorgeous, the framing of shots quite exquisite and unusual. The scripts… the scripts are fantastic, but of course I can’t tell you why. It’s a subversive modern fairy tale, a social commentary, an examination of modern life, how we are more trapped than we would like to admit, how social media frees no-one, how corporations are the new Evil Empire (literally- the one here is even named Evil Corp). And its a thriller too. Oh, and the music score is fantastic, 80s-style keyboards and accompanied by great choices of source music.

But that’s it, thats all I can say. I could write so much more but no, you’ll have to watch those ten episodes yourself, unsullied by spoilers. Its the only way to discover this show. Beyond that, well, maybe that’s why we have comments sections. Feel free. But really, if you haven’t, you really need to see this series. If you don’t have Amazon Prime, then go buy the season one Blu-ray boxset. It really is one of the very best tv shows out there.