It Follows is yet another frustrating horror film. Maybe I expect too much these days (is it possible to have watched too many horror films?). There was great word of mouth about this film and positive reviews when it first came out but it doesn’t really live up to that praise. Yes it does have a great central premise and it is well shot with some nice scares in there but… well, okay, it’s good. But it could have been great.

Jay (Maika Monroe) has a date with Hugh (Jake Weary) and the night goes so well that they park up in a deserted carpark and have sex on the back seat. But things take a strange turn when Hugh then knocks Jay out and she wakes up strapped to a chair in an abandoned warehouse. Hugh tells he that by having had sex with her, he has passed on to her a curse. Unless she herself passes on the curse by having sex  with someone else, a nameless creature that can take on the appearance of other people will stalk her and kill her. Only she and others who have previously received and passed on the curse can see the creature. The creature will not run, only walk, but it will not stop. It cannot be talked to or reasoned with. It will kill whoever currently has the curse and then it will backtrack through those that had passed it on. Her only hope is to avoid being caught and killed by the creature before she can pass on the curse. Well, she looks fairly hot and already has some geek lad back home drooling over her, so she shouldn’t have much trouble shaking the curse. 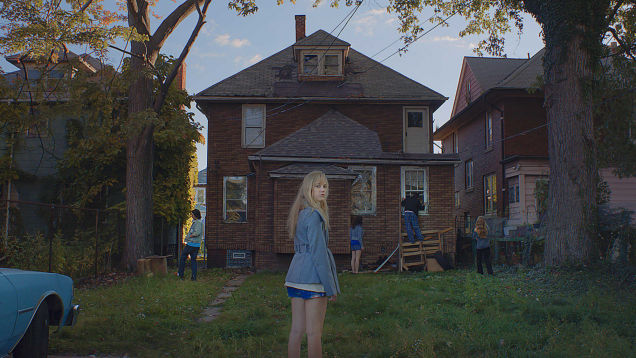 What lifts the film up to something mildly interesting is that it’s well directed and has a great retro-synth score by Disasterpeace that recalls John Carpenter’s Halloween music. The film though falls far short of Carpenter’s classic. For me -and okay, maybe I wasn’t in the right mood, or maybe that great music was bringing to mind that great movie and raising unfair comparisons- It Follows just felt pretty dumb and too teen-orientated. There’s no adults around, no parental involvement, the kids just lounge around watching tv or drive around or… I don’t know. No-one calls the police? Or a parent? Or a teacher? Or maybe a priest? (of course, The Exorcist is positively ancient, these kids have likely never even heard about it nevermind seen it).

Worse, the internal logic itself doesn’t hold up. Early on the creature behaves just as we’ve been led to think it will, but later it starts just, well, standing on the roof of a house because it looks threatening, and throwing objects at its victim in order to avoid a trap. We learn that it was standing in a cinema just watching its victim when it should have been tearing his face off. It’s supposed to just track down its victim and kill, not hang around looking cool or enabling the curse to be passed on. But this isn’t really a horror film, it’s a date movie. I think. Its just a silly teen fantasy that could have been a kick-ass hardcore horror movie with something to say about sexual politics.

Still the film seems to have been very popular so I dare say It Follows Too (see what I did there?) will be on the way before long…