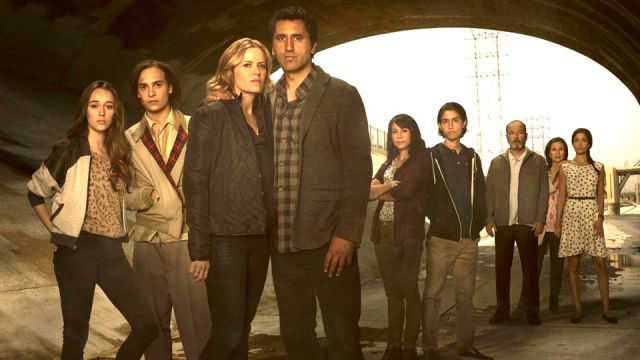 Considering the huge success of AMC’s hit The Walking Dead, it was inevitable that a spin-off would eventually see the light of day. Oddly enough the project doesn’t seem to have had very much confidence behind it- rather than going with a full season, AMC instead went for a six-episode mini-series, sort of dipping its toes into the water as it did with the first series of the original show. I’m not sure why they did that- the original The Walking Dead has proven there is an audience for this stuff, and limiting this series to six scripts to establish its world and characters handicaps the whole project, resulting in a show that doesn’t really have a lot of time to establish its characters or enthuse our interest. The first series of The Walking Dead achieved this by literally throwing its protagonists into the deep end, civilization already fallen and maintaining a constant tension and mystery over its slim episode count. Fear The Walking Dead doesn’t do that, it slowly (oh-so-slowly!) unfolds the nightmarish events and six episodes are just not enough. As it turns out though, that’s only one of the show’s problems.

Fear The Walking Dead is a prequel, located on the West Coast with an entirely new set of characters. Its main selling point is that it starts before the outbreak (or whatever it is- neither show calls the monsters ‘zombies’ or explains what has caused the dead to walk), so we should see some of the mystery of The Walking Dead explained, seeing our ‘normal’ world prior to the buckets of blood hitting the fan, and then watching the fall of civilization as the show progresses.

Trouble is though, that Fear The Walking Dead doesn’t really deliver on its promises. It teases the End of the World but doesn’t see it through. The establishing episode portrays the world on the eve of the Apocalypse, and its interesting enough, and we’re waiting for the dead to walk and society collapse. And then… and then… Well, the family unit that is the central group of the show split up, so we are given an A and B story similar to the format used in the original show. Group One is caught in a street riot so ends up stuck in a barber shop- we catch glimpses of the rioting but the group is cut off and doesn’t know what is going on (no-one heard of a radio?). Group Two meanwhile is stuck at home playing Monopoly (!) waiting for Group One to show up. Power cuts maintain their ignorance of what is going on in the world beyond their street (again, no-one heard of a radio?). Once both groups are reunited back home and an undead neighbour eating a dog is dealt with, they dither a little longer before deciding to leave, whereupon they bump into a military unit that returns them back home to more media blackout. Its the End of the World and our folks know nothing about it other than some kind of bug is going around. We don’t see news reports, internet chatter, rumors of events elsewhere in the world, anything. Its like the Information Age was terminated overnight.

The premise of this show should make for fascinating viewing, and to an extent it does when it finally gets going, but there are so many frustrations. In The Walking Dead, the post-Apocalypse protagonists have come to terms with what is happening and fight to survive it. In Fear The Walking Dead, the characters are like morons at the end of the world. They don’t understand it, cannot believe their eyes, cannot understand what must be done. On the one hand that’s perfectly understandable, the show taking a real-world ‘this can’t be happening/everyone in denial’ kind of approach. But it’s so frustrating as a viewer with five seasons of undead apocalypse behind you. The characters may be behaving realistically but it also makes them look very stupid in the face of whats going on. I felt like shouting at the screen at several points utterly aghast at character behaviour. Unfortunately characters acting like idiots don’t engender much empathy, and frankly I was watching hoping a number of them would just get their stupidity rewarded by bloody demise. 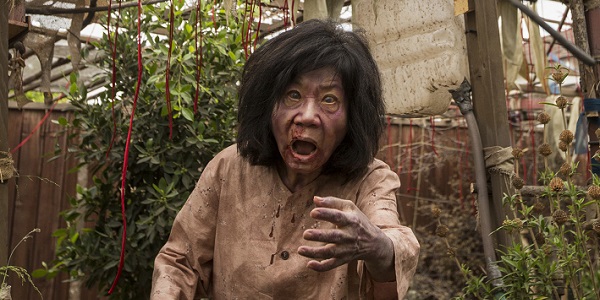 And if the stupidity wasn’t enough, well, these aren’t the most likeable bunch of characters anyway. Something went wrong when the writing team set up the main characters or when the roles were cast because as a family unit nothing really convinces. It seems impossible to really care about any of them; they almost seem to deserve the end of the world. If AMC had gone with a longer season one order, maybe even just up to ten episodes, somehow established some empathy and sympathy with the protagonists before the dead start to upset their suburban idyll, maybe that would have sorted some of the show’s problems, but six episodes just isn’t enough.  Likewise limiting it to pretty much one family unit is putting all your eggs into the one basket and here it comes up wanting, particularly as this family unit is so annoying. The Walking Dead has always had some diversity to its characters; there is always someone to root for, some  differences to give drama and conflict. There’s little here though- Mom has an irritating junkie son and irritating lovestruck daughter; Mom’s boyfriend has an irritating ex and an irritating son who doesn’t answer his phone and is preoccupied with his camcorder. None of them really seem likeable and all of them are pretty and stupid.

Its incredible how much this show falters and how many things are just done so wrong. After five seasons of The Walking Dead I would have thought this would have been a walk in the park and opportunity to use its wider canvas to make a better show than The Walking Dead, tell stories the other show can’t. Instead it just shows how good The Walking Dead is in comparison.

I only hope that the creative team can use the longer second season to fix some of the many problems that Fear The Walking Dead has- get back to telling the story that it should be telling and perhaps rethink the cast (and drop some of them quick). There is a chance that the problems can be fixed but failing that, I can’t really see this show getting to a third season.  As it is, this six-episode first season has the feel of an extended tv pilot that doesn’t really work, and has just gotten by on the excitement fans have for the original show.