The prospect of director Denis Villeneuve helming Blade Runner 2 is more exciting than ever having seen Sicario. It also reinforces his evident fascination with humanities dark side, being a particularly grim, and at times unrelentingly tense, thriller with some fantastic performances (oddly, I did find a particular comparison here with Blade Runner, albeit unintentional- just as Harrison Ford was overshadowed by Rutger Hauer in the 1982 film, here Emily Blunt is overshadowed by the performance of Benicio Del Toro in what is ostensibly a supporting role that simply steals the movie). Alas news that LIonsgate seem keen to move on with a Sicario 2 is a little depressing even if somewhat predictable considering how the film ends. Sicario simply does not need a sequel and I fear it will be weakened by a follow up- I guess this is just a further demonstration of the times we live in, but it’s such a shame that a film like this can’t be allowed to stand by itself anymore. Indeed, it has hardly been given time to be released before the studio has raised the prospect of a sequel. My own response to the news of a sequel was “what? WHAT?” as if it was some kind of joke. Imagine Heat being followed by a Heat 2 and a Heat 3…. it’s heartbreaking really how cannibalistic the film industry is now, success breeding some kind of instant feeding frenzy.

(While those films that deserve or suggest a sequel, like Dredd or John Carter, haven’t a teardrop in Hell’s chance of ever getting one). 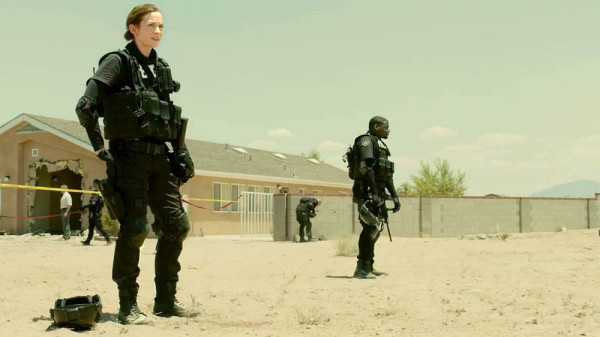 I wouldn’t by any means describe this film as perfect- there are a few pacing issues with Sicario that leaves the middle somewhat laboured, but it remains a superior thriller with ambiguous lines of morality that is quite refreshing. Clearly there is Good and Evil here but its all shades of grey rather than simplistic black and white… There is no moral high ground championed, rather just a vague sense of futility trying to make sense of it all, the distinctions of right and wrong blurred in somehow trying to define a Greater Good, the central question being does the end justify the actions getting there. Having seen his previous film,  Prisoners, it comes as no surprise that Villeneuve has no problem establishing a realistic milieu with fine performances from his cast. What does come as a welcome surprise, considering how intellectual that films probing of human darkness was, is how well Villeneuve manages Sicario’s action sequences. It’s no overstatement to suggest it is so accomplished it recalls Michael Mann’s Heat, but even when the bullet’s aren’t flying it is the threat of violence that is most powerful and impressive. We live in age of films laden with cartoon violence with cities portrayed collapsing in photorealistic detail, whether it be due to superheroes or giant robots or giant monsters, but the implied threat of violence when being trapped in a traffic jam is here far more overpowering. Tension is ramped up incredibly high in three sequences, but beyond that there is a dark feeling of dread, of a world out of control. Its a tragedy, in many ways.

Clearly this film consolidates Villeneuve as one of the most promising directors at work today. Roger Deakins photography, meanwhile, ensures the film looks utterly beautiful, if such a thing can be said about a film as uncompromisingly as bleak as this is. I must stop mentioning BR2 but goodness, one can only wonder at the possibilities of these two working on the project, and what they might come up with if left alone and given decent material (i.e. a decent script). One can only hope and wonder. As it is, Sicario simply remains one of the best films of the year and really deserves some recognition come awards season.