I’m not a big fan of remakes, we live in an age when  we are swamped with them (and the remake’s bastard child, the dreaded reboot). There was a time when remakes were quite rare, and this was one of the first and possibly very best. Philip Kaufman’s Invasion of the Body Snatchers– like John Carpenter’s The Thing a few years later, is a genuinely great remake that offers something new while at the same time being respectful of the original work. It also shares with Carpenter’s film an incredibly bleak ending. Both films show humans struggling against an alien presence and it can be seen that in both films that struggle fails. I suppose Carpenter’s film offers some hint of hope in its ambiguity, but there’s no doubt about Body Snatchers; its the End of the World, for humanity at least (although where does the pods propensity for copying lifeforms end? Once humanity is copied, would they need to turn their attention to all the rest of Earth’s lifeforms next?).

Kaufman’s Body Snatchers is a refreshing experience compared to current sci-fi/horror films. You can certainly tell it was a 1970s film- it carries much of the feel of films of that decade, in that it all looks very real and ordinary, without any Hollywood artifice. It features a brilliant cast of ordinary-looking actors playing ordinary characters. Well, I say ‘ordinary’ but there’s something pleasantly kooky about each of them, the film showing them as examples of what makes each of us different, each of us truly human, as opposed to the pod-person version. There is nothing particularly special or heroic about any of them but they are fascinating all the same. 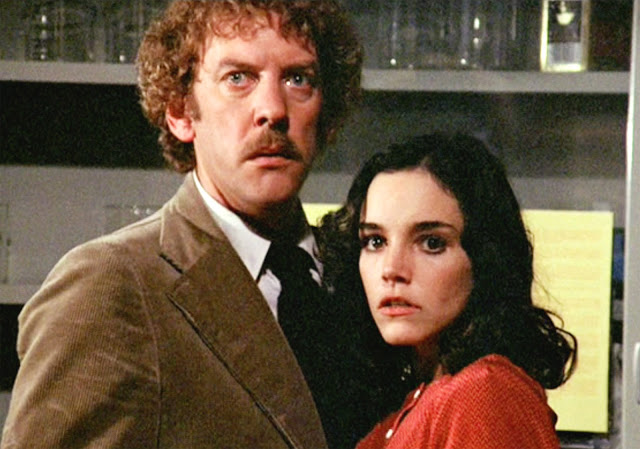 Our protagonist is an ‘Everyman’: Matthew Bennell (Donald Sutherland). a San Francisco health inspector, whose best friend Elizabeth Driscoll (Brooke Adams) is a lab analyst in his department. Elizabeth is in a relationship but her boyfriend that she is living with has started to act strangely. Bennell has noticed other people complaining the same about their partners too; he thinks maybe she should see David Kibner (Leonard Nimoy) a psychologist friend of his. When they finally meet, Kibner reveals he has had a number of patients saying the same thing- but he dismisses it as surely just a symptom of the modern world, an excuse for getting out of a failing relationship, for not showing commitment or being able to compromise. At least that’s what he is saying- but he’s basically asking people to ‘sleep on it’ and it soon becomes apparent that sleep is death. So is Kibner really Kibner anymore? Can anyone be trusted?

The film taps into very real modern-world anxieties. In a busy city of thousands of strangers, is there something odd about strangers seeming strange? In the film, we ‘see’ countless faces of people/characters in crowded scenes that we cannot know; who is human, who not? The pacing of the film is slow and hypnotic- from the very start of the film, it’s already too late. How many days or weeks before have the alien lifeforms been drifting down from the sky? The films characters are stumbling onto something that has alread progressed beyond the tipping point. We are witnessing the slow end of everything. Street scenes feature mundane events like trash lorries collecting rubbish; until the familiarity of it in successive scenes becomes disturbing and we realise that’s not just normal domestic rubbish being trashed. We see crowd scenes with isolated figures running by, sometimes being chased by others, ignored by both the general crowd and the main characters. They are all hints at other stories of horror unfolding in the background as the menace slowly spreads. It is all very subtle. The world is ending and no-one knows it.

I guess that makes it the scariest End of the World scenario there is. Great movie, and one that is certainly standing the test of time, as relevant now as it ever was back on its release.